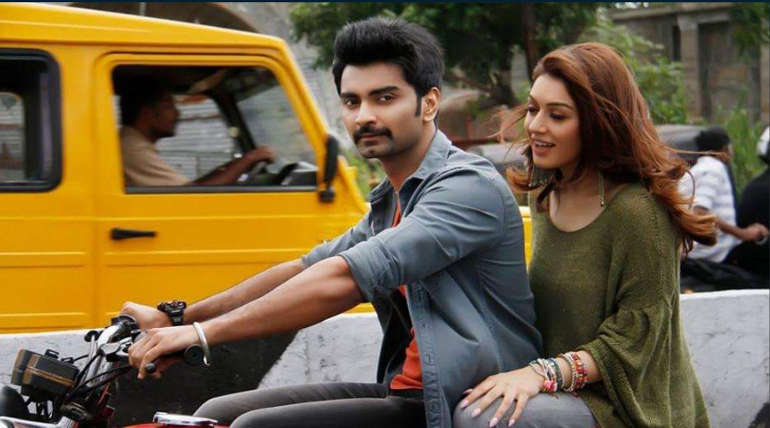 Following an interim ban by Chennai High Court last week, the film was actually scheduled for its release on May 9. But, the ban has been cancelled yesterday night following which the much-awaited police movie hit the screens today as officially announced by the filmâ€™s production unit. The 100 movie review is as follows:

100 movie is produced by Auraa Cinemas and it comes under the direction of Sam Anton, who has earlier provided two hit movies namely Darling and Enaku Innoru Per Iruku. Following them, it is his third film. Atharva, Hansika, Yogi Babu and Radha Ravi play the major cast in the movie.

In the film, Atharva  (Sathya) desires to be an energetic police officer and tries for a job in the police department. Already, in the film's trailer, the heroic dialogues delivered against the recent burning issue of women's violence and raise voice for women safety.

In that view, it would appear that he would be playing the role of a high-ranking officer who would be dealing with many big villains in the movie. But, contrary to this, in the first half of the film, he is working in the control room in the police department. He has been involved in hearing the mobile calls of suspects.

In the context of working with a sense of boring work, a 100th call dialled to the control room is the turning point of the movie. He gets to know the details of a young girlâ€™s kidnap. Then, here turns the rest of the film as to how would he turn the control room atmosphere in favour of him and hunt the culprits.

Crime stories against women and heroine-centric stories are now going good in the Tamil cinema box office collections. Although it appears as one such movie, the screenplay moves in a different manner.

Atharva has revealed his full potential. Yet, the fight scenes in the film could not make him think as a mass hero. Hansika Motwani plays opposite to Atharva. The romantic scenes of Atharva and Hansika did not get fit for the movie as they are looked as unwanted speed breakers to the speed of the movie screenplay. In addition to this, Hansika's performance in this film does not meet the expectations of the Kollywood fans. Sam CS adds great strength to music and did his job well on his part. Yogi Babu comedy scenes and Dialogue Deliveries bring a huge laugh to the audience in cinema theatres.

While Yogi Babu was seen then and there in the recent movies, in this film, he travels throughout the film as a full-time comedian. Radaravi's character is also widely spoken in the film.

In their recent projects, both Atharva and Hansika have not made a big success and this movie turns towards a compelling success for both. The screenplay of the film is mixed with both boring and interesting scenes together. Anyhow, it a watchable entertainer movie. According to the audience views, the director Sam Anthony could have made a crime thriller movie a better one.