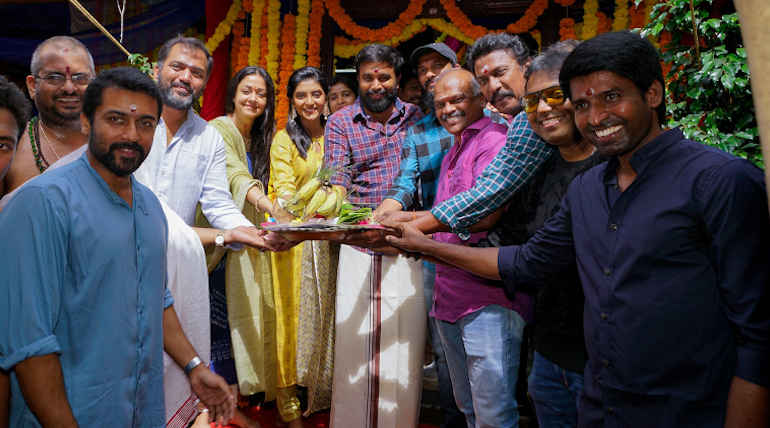 2D Entertainment signs up for its 12th Project:

The most famous production company, named "2D Entertainment," joins hands with the upcoming director Era. Saravanan for an untitled movie. The Pooja for the film has begun today (28th November) at the corporate office of 'Agaram Foundations' here at Valasaravakkam, Chennai. This movie has a star casts of Suriya, Jyothika, Sasikumar, Samuthrakani, Soori, and Kalaiarasan in prominent roles.

The Official Twitter handle of 2D Entertainment has confirmed this instance. Generally, 2D Entertainment gives us movies that are mainly a family entertainer, and this movie is also expected in that kind of Journal.

Era. Saravanan started his career as a Cinematographer and made his debut film called 'Kathukutti' starring Narain and Shrushti Dange on lead roles. On signing with 2D Entertainment, the crew gave a few glimpses about the script. The story is set to deal with emotional and family relations along with a village backdrop.

The shooting for the entire movie is scheduled to be held in the places around Puthukottai and Tanjore. The Cinematography is led by R. Velraj, and Ruben takes care of Editing. D. Imman makes the Music, and Mujupur Rahman overviews the art direction for this film. Sony Music South bore the musical copyrights.