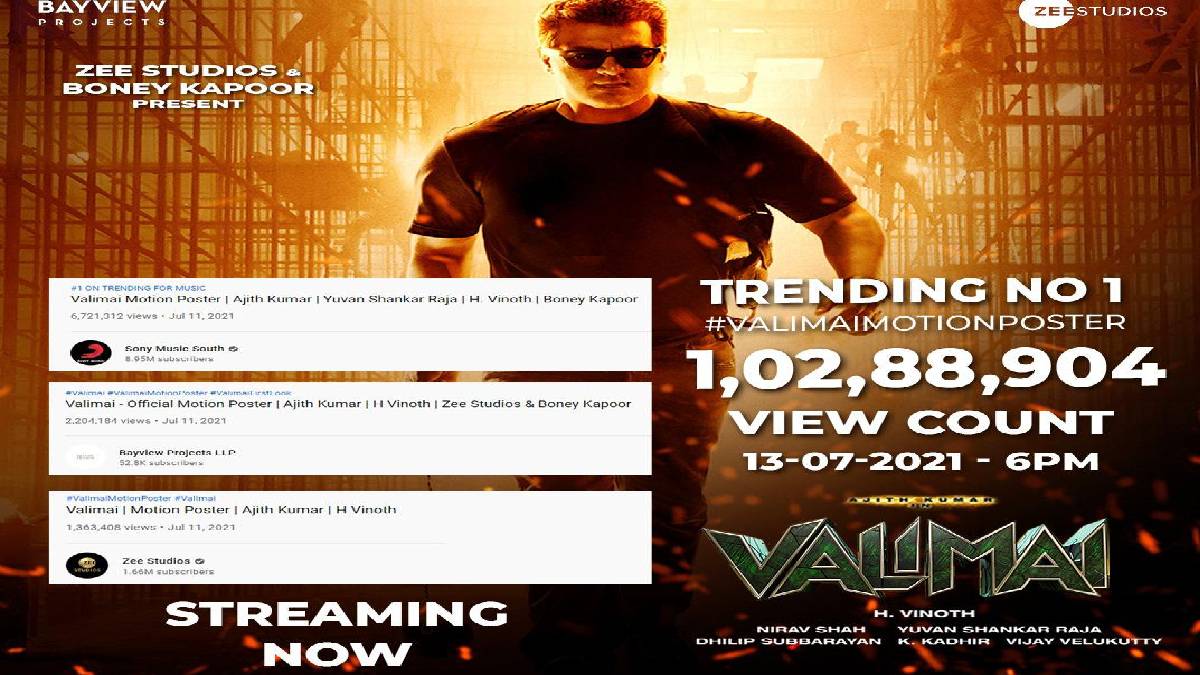 Thala Ajith's 'Valimai' motion poster has crossed ten million viewers in just three days of its release. The anticipation among the fans of actor Ajith regarding the Valimai update cannot be described in a single sentence. The worldwide fans of Ajith are curious to hear the further update of the film Valimai starring Ajith.

The film is co-produced by renowned producer Boney Kapoor's Bayview Projects and Zee Studios. The film stars Huma Qureshi in the female lead role, Kartikeya Gummakonda, Bani, Sumitra, Achchiyund Kumar,  Yogi Babu, and many others. The music is brilliantly composed by Yuvan Shankar Raja, with the cinematography of  Neerav Shah.

The pooja for this film was put on 2019 and, that is where the curiosity began. The updates were about to blow up, but the covid 19 pandemic shuts the doors of Valimai updates. The films that poojas were done after Valimai was brought to the audience's views, but still, Valimai's major updates have not come out.

On Sunday, the fans uploaded the poster on their Instagram stories and in the Whatsapp status. The fans are now waiting for more updates as they are energetic after the motion picture release. And to note, many updates are sooting up on social media. Even yesterday, it was reported that Thala Ajith would be going to Europe in a few days for the final phase of the shooting.

Following this, in the current release, Ajith's 'Valimai' movie picture has been viewed by around ten million viewers in just three days of its release. The comment section is filled with positive and exciting reviews praising actor Ajith and Yuvan Shankar Raja's music composing. The BGM of the film Valimai has clubbed a respective fan base.