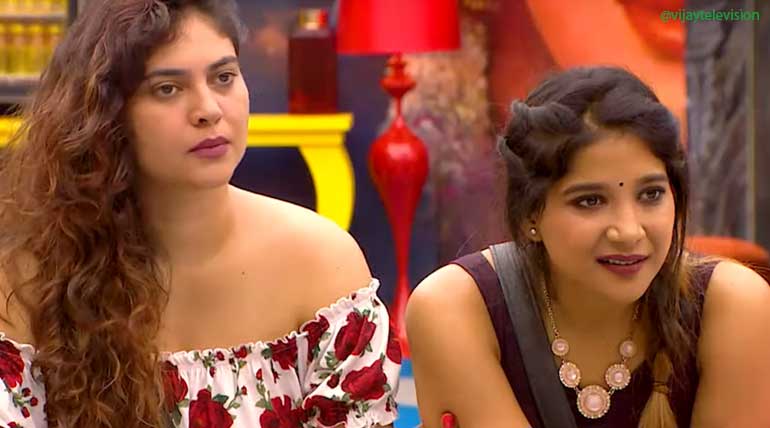 Bigg Boss 3 Tamil amassed audience in a massive way. Yesterday being 49th day, a fun play was organised where the housemates should select an angel and devil from home. As expected, everyone has moved their coins strategically. Kasthuri being a new entrant, snapped Sandy and Kavin as the devil's outlining their previous actions. It was Sakshi's turn, and she chose Sherin as angel despite some difference of opinion in the last two days between them. On the contrary, Sherin voiced out Sakshi as an angel but conferred the crown to Madhumitha her recent friend.

It was a surprise not only to the audience but to Sakshi as well of her behaviour. Housemates opined Sakshi uses Sherin for all her tantrums about others. Cheran generously pointed to Sherin that Sakshi was just a kid who needed attention from everyone in the house.

But Sherin was upset with Sakshi's nagging. She felt Madhumitha's care a haven and got close with her, and this made her confer the title angel to Madhumitha.

Shocking to see Losliya devil crowned Kasthuri and the reason she stated was that Kasthuri was judgemental while she was entering the home. She scanned us under the stereotypic lens and judged though she later changed her views. Kavin and Sandy crowned strategically. There is Sakshi-eviction vibe in the house since two days. Today's episode will unveil the truth