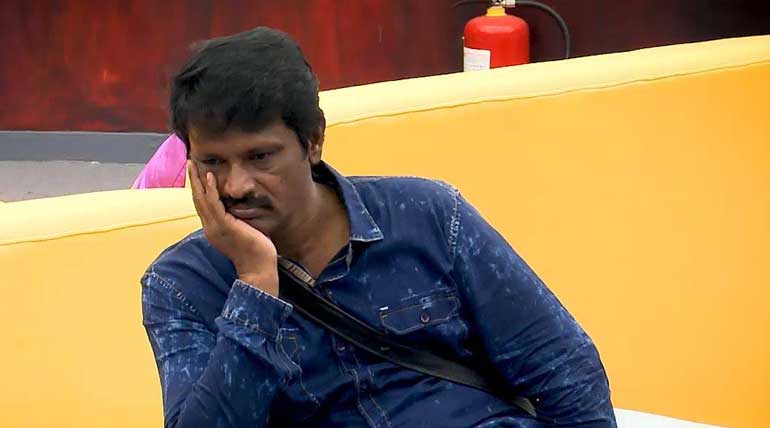 Day 11 of BigBoss 3 is a culmination of the remaining parts of day ten which was not streamed yesterday. The cleaning problem of the morning continued from 11.45 on day 10. The dominance of Vanitha was questioned by Cheran of not ordering a cleaning for all areas. Vanitha said that she is not going to talk to Cheran anymore and other unwanted characters.

Mohan Vaidya in the afternoon said that he is the captain and everyone should only speak to him about any problems in the big boss.  He said no one should create a situation which makes not to talk or see each other.  The day ended with an emotional imaginary phone talk of Cheran to his daughter and parents. Losliya consoled him with a hug.

Vanitha undisturbed and back in action on day 11:

Big Boss summoned Vanitha to the confession room, where she was informed of someone who has come to meet her. She came back and made the issue nothing to her team.  She started the cleaning problem again and wanted no one to interfere with her team.

In the afternoon, Big Boss ordered the continuation of the task and asked two members of Anna Paravai team to be selected by others and sent to the task room.  Sandy and Madhu were selected, and Fathima was said to read the task.

The said game was to take only star coins and yellow coins from well of slime.

Madhu and Sandy collected 29 yellow and 6-star coins and collected  590 points out of 1000 from the task.  In the afternoon, Losliya was targeted at being against the Vanitha team.

She was accused of leaving their group when they were talking.  Kavin asked her what is happening, and she replied that since she was unable to understand their conversation she left.

Avvai Shanmigi act is the next task:

All the male contestants were given the makeup of the female contestants.  Kavin dressed like Sherin and speaking and acting like her made some incredible actions for everyone to laugh out of their heart.

Saravanan dressed like Fathima read news of the happenings of the big boss show and walked like much to the dismay of Fathima. Sandy, dressed and acting like Mira, made a catwalk like a model and brought happiness in the Bigg Boss 3 Tamil home.

Mohan in the role of Abirami was bombarded for repeating the Tamil girl and the issue which was the topic of the past few days feud was made into a comedy.  Darshan as Vanitha imitated her well and shouted at the top of the voice. The day ended happily with the dance performance of contestants.

Today seems to be one of the best days of the Bigg Boss 3 Tamil were everyone, including the audience and contestants, laughed with their full heart.  What is in store for another 89 days is the exciting factor of BB3.