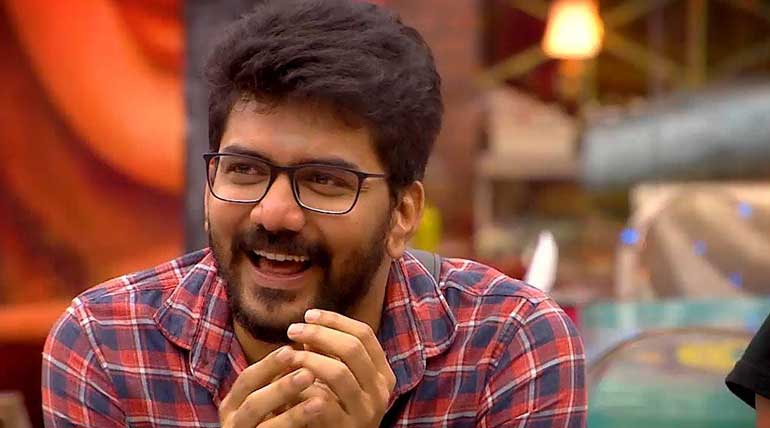 A fantastic gana song criticizing everyone jokingly in the Bigg Boss 3 Tamil house enlightened it joyfully in the morning. Starting from the evicted mother Fathima Babu it went on from one contestant to others.  Even the contestants who were criticized were enjoying it.

The big boss called Kavin and Meera to instruct them to be the police inspector and constable respectively with the right to find out the murderer. They have the responsibility to question anyone in the BB3 house.

The target has to find the murderer of 4 people in the Bigg Boss 3 Tamil house. Kavin starts his investigation as the inspector ably aided by the constable Meera

Ghost speaker in the BB3 house:

Sandy was entrusted with the task of speaking to the ghosts put on fantastic makeup and dressing. He starts his questioning with the 4 spirits to find out who is the murderer.

Madhumitha being the scapegoat is also considered the murderer:

Similar to that of a film thriller police investigation, the setup of the investigation in the big boss was commendable.  A police van was brought to heat up the atmosphere of the inquiry, which was like that of a Hollywood movie.

The way Madhunitha answered the police was precisely like that of a hi-fi mafia don.  The questioning of Losliya was professional police work of framing her as a partner of Madhumitha.

Also, she was informed that Madhumitha has already confessed and it was for her to accept the crime.

Cheran confused and angered of the horror task:

Being left out in the blue and not knowing what is going to be the end of the horror task, Cheran wanted to discontinue the luxury horror task. He contends that the four dead are left in the outside under the hot sun.

But to that Kavin comes in full defense to the task by the bigg boss. To that, Cheran said he is not going to part of the task and no part in the luxury budget.

As per the instructions of the big boss, Vanita and Mugen kill Kavin by stealing his gun. It was rightly accomplished  and the constable Meera is promoted to inspector. She continues her job and requests everyone not to touch others.

The Bigg boss makes the Bigg Boss 3 Tamil house roar with laughter after announcing the murderers:

In the evening the house split into laughing by the contestants when bigg boss revealed the way the murders were conducted. Everyone, including Cheran, was happy about the manner Vanitha, and Mugen intelligently executed their task of murdering without any clue to the other contestants.

As per the request of bigg boss the best two performers of the horror task Vanitha and Mohan Vaidya were selected by the contestants.

Next bigg boss wanted the contestants to select one best performerf among all them as the bestperformer of all the luxury budge tasks this week with valid reason. Everyone chose Sakshi because of her cooperating nature.

Cheran and Saravanan put in jail:

She told the bigg boss that Saravanan and Cheran did not cooperate in the horror task. To that, an angry Saravanan asked her to give the reason.

To that, Abirami said he did not actively participate in the horror task. Also, Cheran was protesting against the task in the last hour of the task.  But to everyone's astonishment, they were both asked to be put in jail.

Three nominations for the captain of next week announced:

It brings in the fact Mohan or Vanitha may not be eliminated this week if they become captain.

Heated discussions regarding the jail term of Cheran and Saravanan:

Vanitha, as usual, started the arguments by saying that either Saravanan nor Cheran did not deserve the jail. She said that they were not given any role, and hence, it is not correct to say that they are not cooperating.

It leads to severe consequences of the bigg boss asking the captain Abirami to select the majority opinion of the contestants to jail two of them.

When it was decided that Kavin should replace Saravanan in jail, Losliya offered to go to jail. To that, Vanitha vehemently opposed saying that she will not allow Losliya to take a good name.

Losliya irritated by it goes to the bathroom where she cries when consoled by Kavin. Saravanan showed his anger to the other contestants for not opposing the jail for him.

Altogether today was a fun-filled and entertaining episode with all the spice for it. Also, it has laid a fantastic platform for tomorrow's episode to be better than today.