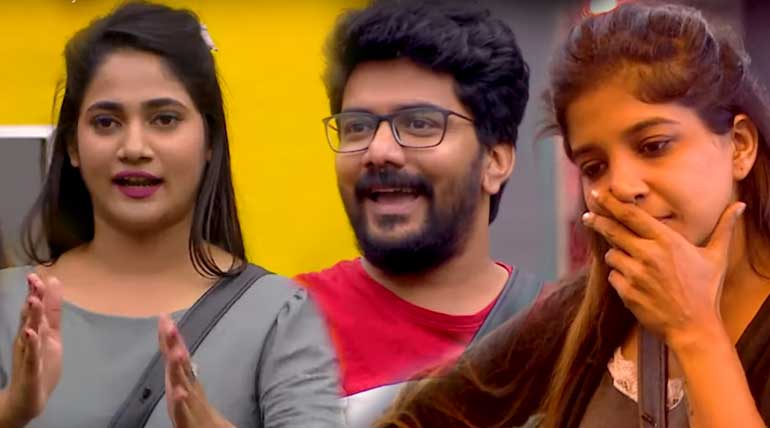 The day started with the continuance of chocolate confusion yesterday. Tamil people are saying why should such a ruckus for chocolate, which is similar to Senthil's banana comedy. Sakshi brought it up during the morning session task of speaking on a topic.

She talked about friendship and said it should b above all. Real friendship is about trust and what transpired between friends should not be revealed to anyone. Next, Cheran noted his friendship with the other contestants of Bigg Boss Tamil 3.

The third pair of Kavin and Abirami entered the task room to take 15 alarming clocks out of the 500 clocks in the task room. Vaidya and Madhu were encouraging them. Since they were not able to do it in 20 seconds, they were not given any points.

The fourth pair of Sakshi and Tharshan end up with no points:

The fourth pair of Sakshi and Tharshan went into the task room to pick up 25 alarming clocks out of 700 clocks within 45 seconds. This time the encouraging couple of Losliya and Sherin were allowed to help them by words.

They ended with zero points after not being able to complete the task in time.  Everyone was saying it is a tough task. But Kamal said it is the end of the luxury task for this week.

Since the rule of only one person should be in the smoking-room was violated even upon many remainders, the big boss announced a cut of 100 points in the luxury budge.

The debate in Bigg Boss Tamil 3 hot up the show:

Big boss announced a contest for three topics among contestants divided into two teams. The left out lone contestant can join any team he/she chooses. Meera should be the Gopi for this Neeya Naana debate.

The cleaning topic was highly debated for and against by the two teams. Meera, the anchor, was also brought into the middle of her long sleeping hours.

A lot of dirty secrets of the contestants came out in the open as the big boss wanted to happen. Meera closed the debate favouring cleaning team is doing the cleaning earnestly.

In the second topic, the Saravanan team favoured it is the happening in the house is friendship and the Cheran team says it is not friendship but more sacred than that.

Initially, the debate went out of the way of friendship or fake.  Kavin cleared his stand that he is having relations with all only to develop a friendship.

Sandy put the same side goal of singing the Guna song of it is beyond friendship and something sacred.  Meera ended the debate favouring Saravanan team this time confirming the relationships in the house was only friendship. It also brought the love and disruption in it of Kavin â€“ Losliya.

The third topic was started with favouring silence over speaking contestants:

The heated debate went on for a long time, and Meera decided that  Cheran team of speaking is better liked by the audience than silence to win. Overall, Cheran wins the debate by 2-1.

The tactic of bringing the game to increase relationships or bring more rifts to them in the bb3 played well today. How it will bring the changes between Mugen â€“ Abiraami and Losliya â€“ Kavin â€“ Sakshi have to wait till 9:30 to know from watching bb3  seen in Vijay TV and Hotstar.