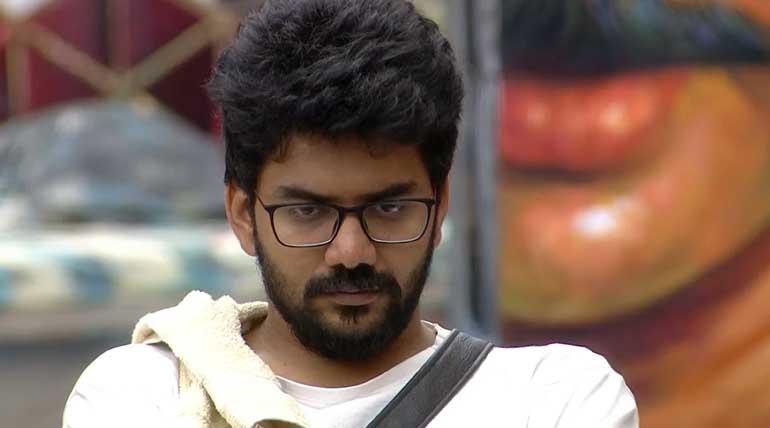 Losliya seems to be not so enthusiastic only today in the morning dance time in the last 25 days. Maybe it is due to the lyrics of the song "ooru vittu ooru vanthu, Kathal Keethal pannatheengo" or her mood no one knows.

Meera starts it again in the morning:

The house captain Sakshi, and the cleaning captain Meera fought about cleaning the dining table. Why Meera is continuously doing it is another issue to discuss later.

Is another love blossoming between Tharshan and Sherin? Already there are too many confusions and exciting happenings going on between the young team of bb3. And one more will be too much or will it make it better?

Maybe Losliya also feels like it and puts a knife into the heart-shaped chappathi Sherin made for Tharshan. When she was asked why she did it by Tharshan, she said she would do it again if it happens.

Nomination for the captain by contestants and persons for jail:

The best performer of the luxury tasks was put into the vote, and Saravanan won it by one vote cast by Cheran in favour of him. The generous nature is evident from Cheran casting his vote to his opponent Saravan to win by that vote.

Big boss immediately selected the three nominees of the next week captain. They were Saravanan, Tharshan, and Reshma. The next was to select the contestant who did not perform well.

Meera wanted her to be nominated as she did not switch of the clocks well and when asked for opinion Cheran said only because of Sakshi they lost 100 points luxury budget. So Sakshi and Meera were selected for the non-performers of the week. Then big boss asked the other contestants to send these two to jail.

Sakshi and Meera fight in jail:

Meera as usual silently went into the jail and Sakshi was sent with celebrations, and she acted as if she liked it. Then came the disappearance of Meera in the bathroom for more than 45 minutes.

Big boss has to intervene by asking Meera to change her battery to bring her out. Then fight started between the jail inmates. It was over the non-issue of Kavin's remarks and continued till the end of the day.

As Kavin said during the closing minutes how long will they only roll my head when he heard about the fight in the jail. It was only the Kavin love triangle and the Meera issue all through the day 25 of Bigg Boss Tamil 3.