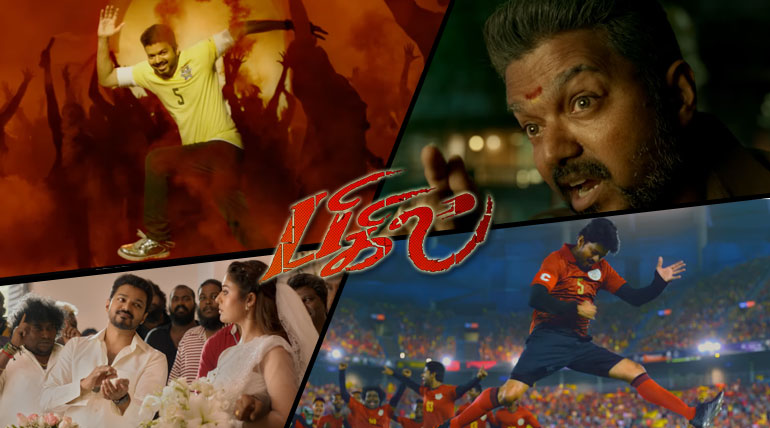 Bigil trailer released now creates huge hype for Vijay-Atlee- AR Murugadoss combo for Diwali: Bigil trailer after a long nail-biting wait is just released now. It has put an end to all the rumors about the release date also. Yes, it is confirmed now that Thalapathy is going to make this Diwali a special not only for his fans but all Tamil people worldwide. Crackers started bursting from 6 PM today right after the release of the trailer of Bigil starting the Diwali celebrations fifteen-day earlier across Tamil Nadu.

Bigil trailer puts an end to many rumors: With the delay in the trailer being released for some time, various rumors were floating in the social media. There was a rumor of Nehru stadium in Delhi canceling the sanction to shoot Bigil movie in it.

Also, there were talks of the ruling government in Tamil Nadu taking many steps to stall the release of the film. All this has now come to an end with the fantastic trailer of Bigil.

Bigil Trailer of 2.41 minutes says it all: As the production house captioned that "Enggalukku Football Allam Aada Theriyathu Aana Enga Attam Verithanama Irukuum". The trailer proves that the 180 crores spent by Kalpathi S. Aghoram will sure be the best investment.

Vijay speaks the said sentence in the trailer. But the 2.41 minutes trailer brings in multiple faces of Vijay. One is the stylish young youth sporting a jersey and seems to be a coach of a women football team, and the other is the grey-haired Vijay.

There is also a wedding scene with Nayanthara and many action scenes to make the Vijay fans celebrate Diwali in happiness.

Will Bigil, with sports being the limelight of the movie, could hit the Chinese markets like Dungal. And will it be a grand success like Mersal for the Vijay-Atlee- AR Rahman combo has to wait till Diwali to be known and celebrated.