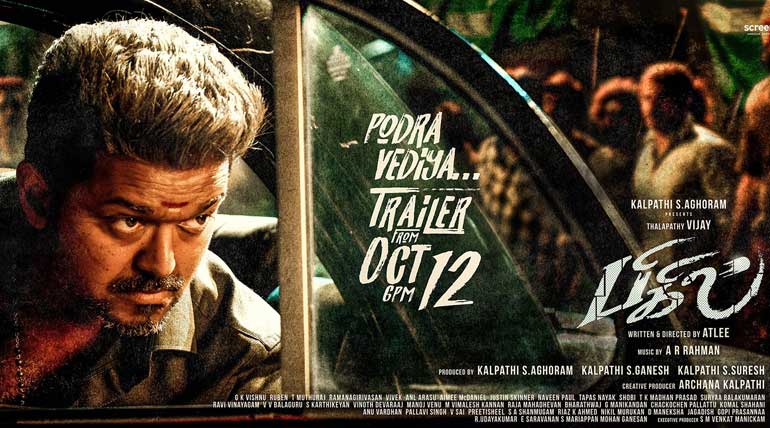 Thalapathy's 'Bigil' Trailer starts Cracking from October 12: Deepavali and Thalapathy Vijay's movies are the bodies and the soul for the past few years. There is no celebration without Thalapathy movie in the Deepavali release. The treat for Deepavali 2019 is 'Bigil', and the sound cracks ears for sure.

Bigil Trailer Spark: Bigil is a drama film casting Thalapthy as Michael without knowing the story plot. The Bigil crew is getting ready to reveal more surprises about the drama by launching its firing trailer on October 12th, 2019 by 6 pm #PodraVediya.

Bigil movie is meeting the silver screens this Deepavali to crack Bigil all over the world. The post production of Bigil movie is in full swing; The first look of the picture is already an internet sensation. Thalapthy Vijay short story about the teaser, "Killing the child inside a mother's womb before its delivery". Concerning the fact of Thalapthy, Bigil is releasing its trailer without a teaser. The songs of Bigil are seriously Verithanam labeled by Sony Music Entertainment.

Bigil trailer is a spark for the cracker movie to fire on Deepavali all over South India. Vijay-Atlee becomes like Dhanush-Vetrimaaran combo after the cracking of Bigil with monstrous sound.

Let us wait and watch the record-breaking views of Bigil trailer by 6 p.m. on October 12th, 2019 this weekend.