Darbar Box Office Collection: This is the First Collection in Chennai 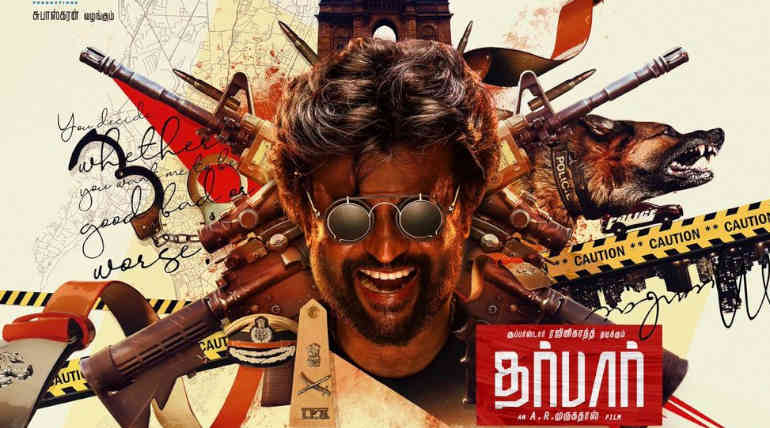 Darbar box office collection on Day 1: Rajini's movie can never go amiss: It has been twenty-four hours since Rajinikanth's movie Darbar hits on theatres. On January 9, it was nail-biting for the fans of Rajinikanth till it is screened owing to a lot of censor hiccups. More than 4000 screens, the movie was shown across the world on January 9. It had a fantabulous opening and has been receiving positive responses worldwide from Rajinikanth's fans. Directed by AR Murugadoss, the film outlined a police officer's determined move to bust a drug racket in the city of Mumbai. Trade Analyst L. M. Kaushik disclosed the box office collection as Rs 2.7 crore on the first day in Chennai alone. This is the second time the superstar has struck gold by grossing more than Rs 2 crore at the Chennai box office.

Not only in Tamil, but Darbar has also released in Telugu and Hindi as well. It was a massive opening tweeted Ramesh Bala from Hyderabad that the movie garnered Rs 12.05 lakh on its opening day. Rajinikanth movie usually has a welcoming note from foreign countries also. "Darbar has a dream run in foreign countries," Trade Analyst Ramesh Bala tweeted. The USA, Malaysia, Singapore, and Australia did have mint a very decent income on the first day. The US around 6.15 P.M recorded US$615K (Rs 4.38 cr) but was not the final figure.

In Australia, the movie has minted A$160,000 (Rs 78 lakh) on its opening day. Even in Singapore and Malaysia, the movie has topped the list. Darbar stands top in the top 10 movie list in Singapore. Even in Malaysia, it is featured in the top 10. Lyca Productions bankrolled the project with Rajinikanth, Nayanthara, Nivetha Thomas, Suneil Shetty, and Yogi Babu in the lead roles. Anirudh Ravichander music composed it, Santhosh Sivan cinematographed, and Sreekar Prasad edited the movie. Darbar is dominating the box office in the south. This weekend is going to be thunderous, with theatres replete with people to witness the mass of the "Dream Hero" Rajinikanth.

Darbar Box Office Collection: This is the First Collection in Chennai