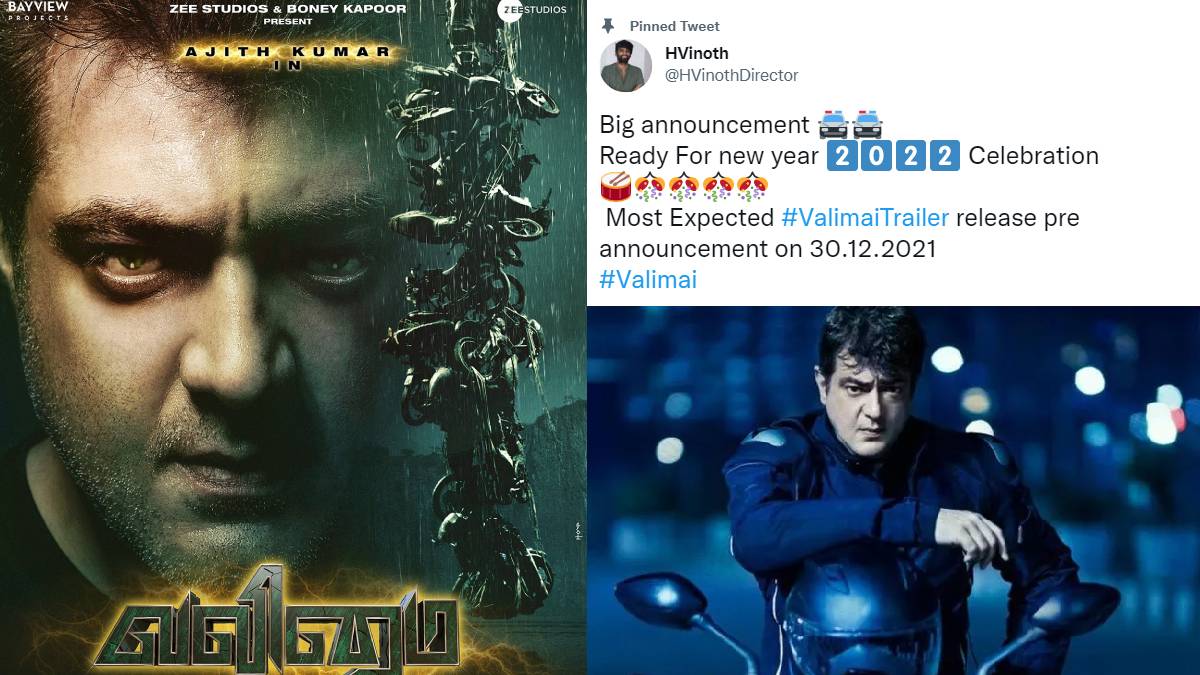 Valimai Tamil movie comes with a new update on its trailer release. The director of Valimai H. Vinoth is announced that the Valimai Trailer will be released on December 30 at the day before the end of 2021. Fans are eagerly anticipating the release of actor Ajith's Valimai trailer.

Valimai is one of the most trending hashtags of 2021 that went viral throughout the years with updates and rumours. The official updates of the movie Valimai starring actor Ajith Kumar started sprouting from June 2021. Following that, the Valimai Motion picture was released, which was trending for the next one week on youtube.

With that, in a short period of time, Valimai first single, "Naanga Vera Mari", was released. The song was a huge hit with the music of Yuvan Shanker Raja and with the lyrics of Vignesh Shivan. The beats were heavy throughout the song. The lyrics were full of praises and meaningful content.

After that, the Glimpse of Valimai was officially released. Valimai Glimpse has been nailed with frantic background music. The bike scenes were breathtaking and speechless. The dialogues were powerfully written, and a few scenes gave me goosebumps. This video was well received by the fans.

And recently, the second single, Mother song, was released sung by Sid Sriram with Yuvan music and Vignesh Shiavan lyrics. The lyrics were so warming and heart touching. For many, the song was connected close to the heart. Following this was the release of the Valimai Making video, which is still trending on social media.

The Valimai making video has gathered more attention than the other updates. The video conveyed the hardships faced by the Valimai movie crew during the shooting. Ajith fans were happy at the same time saddened by seeing the efforts taken by actor Ajith to satisfy his fans, especially in the stunt scenes.

With updates at equal intervals now, the director of Valimai movie H. Vinoth has announced an important update on the Valimai movie trailer. In it, he said that the Valimai trailer could be expected on December 30 2021. The movie Valiami is scheduled to release in Pongal 2021.