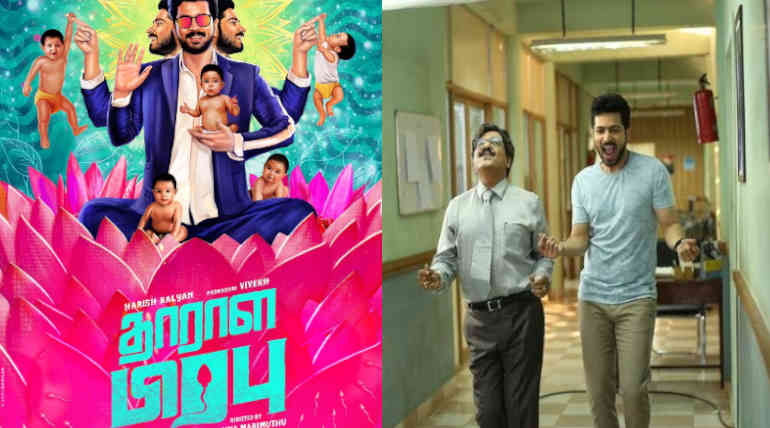 Harish Kalyan blocks 2020 with the stories of blockbusters Vicky Donor and Pellichooplu in the retelling process for the Tamil audiences.

While the shooting of Kasada Tabara and Pellichooplu remake is currently underway, filming of Now, Dharala Prabhu has begun. In the meantime, the film's first look poster has just been released. Composer Anirudh has officially posted it on his Twitter page.

The variant First Look, which has five children in the hands of Harish Kalyan, who sits in the lotus-like Brahma, is now going viral on social networks. Dharala Prabhu's first look poster roams the gadget screens for the intuitive and intriguing look of Brahma avatar of Harish Kalyan with many children around while himself sitting in the lotus. Arun Vijay starring Thadam fame Tanya Hope co-stars romantic actor Harish Kalyan for the sperm donation story highlighting the Ayushman Khuranna's epic hit in Bollywood.

Padmashri Vivekh joins the Dharala Prabhu team to depict the unique style of his role along with Harish Kalyan on the silver screen. Mehandi circus, Managaram cinematographer Selvakumar, holds the camera to portray the intriguing screenplay with a fresh look of Harish Kalyan and Tanya Hope.

The film is expected to hit the silver screens this March.