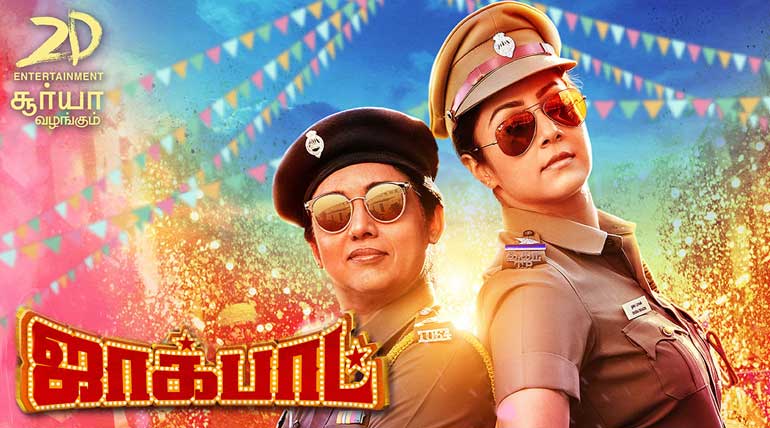 Jackpot, the much-awaited comedy action thriller, is counting hours to hit the big screen. On August 2nd the movie will embellish all theatres. Jyothika and Revathi sporting as cops created much expectations amongst the people, but the recent trailer gives other clues as well. Hence Jackpot is expected to give us a "Jackpot" indeed. Jyotika as Akshaya and Revathi as Maasha are rocking their performance unequivocally

Recent past we can see Yogi Babu in all.women-centric Movies. He was taking the comedy lead role in Nayanthara's "Kolamavu Kokila" and also sported commendable comedy sequence in Jyotika's Katrin Mozhi. He played a lead role in Gurkha movie recently, and to an extent, the film welcomed good responses. He was shown in the trailer with a hint that he might be travelling throughout the movie with the two lady leads.

Mansoor Ali Khan was just flashed for three seconds in the trailer, but he managed a good action.  "Ivalugula" he voiced out in the trailer resembled one of his old movies "Minsara Kanna" where Kushboo played a feminist role with Vijay played the lead. His action received good applauds for the movie. Hence women-focused is not a new chapter for him.

Also, Anantha Raj and Motta Rajendran are of late seen together in horror movies, and they team up to give the best comedy track. This movie is also expected to replicate the same. Overall, a comedy with action movie is going to hit the screens on Friday. Surya's 2d entertainment produced this, and this is slated to release close to Surya's birthday which was on Tuesday. Let us wait a day more to review it.