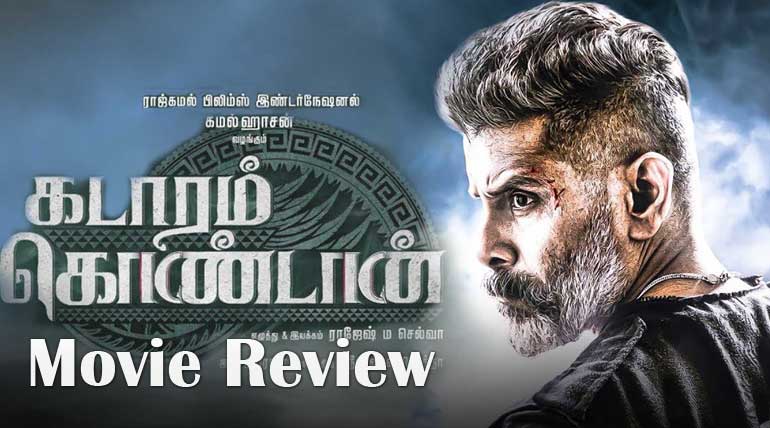 Chiyan Vikram fits well in the would-be shoes of Kamal in the role of a hijacker - Ex-Commando in Kiradaram Kondan. The movie moves at a medium to fast pace, thanks to the background music of Gibran.

Director Rajesh M Selva has given his Hollywood touch again to this action-thriller after Thoonagavanam. The movie is set to ring the coffers for the Raj Kamal Movies, the production house of Kamal Hassan.

Kamal role played by Vikram to the awe of even the veteran actor:

Akshara Hassan plays the lead female part of the movie. Her father Kamal would be proud of actions and showing the different emotions elegantly in the film. Abi Hassan, son of veteran actor Nassar, is debuting in the film. The hulk seems to have done his part well in the movie to maintain his father's skill in acting.

Rajesh M Selva originally readied the script for Kamal Hassan in the lead role. Kamal impressed by Rajesh's Hollywood style of work in Thoongavanam booked him as the director for his next movie.

But due to political presence, Kamal was not able to act in that movie. While they were searching for an actor in Tamil, who could act like Kamal, they were not left with much choice other than Vikram.  He is one of the few national winning actors in Tamil Nadu after Kamal Hassan.

The first half of Kadaram Kondan setting the plot for the second half:

The first half of the full movie taken in the background of Malaysia. It starts with the background music of an Ilayaraja song. Vikram intro was chasing scene and meets with a road accident and hospitalized. The movie moves suspense about Chiyan Vikram chasing and accident.

Abi Hassan acting as doctor and Akshara's husband in the film saves Vikram in the hospital. Because of this, his wife Akshara got kidnapped by a gang.  They want Abi to bring Vikram out of the hospital to save his wife.

Abi, unknown about the past of Vikram, brings him out to save his wife. It brings the interval and the suspense to the audience of why Akshara kidnapped. The movie starts from here with lots of unrevealed questions about Chiyan Vikram, which tempts us to know his full history.

The music of the movie and the cinematography takes the film in a good pace, Gibran makes the movie in the fast run with is excellent music skills.

Kidnaping twist and Chiyan Vikram change over scenes are fantastic. The audience is astonished of the interval, which came so fast. The first half runs less than 60 mins, around 58 minutes.

Vikram and the director at their best with stunts and plot revelation in Hollywood style in the second half:

The second half starts with a sleek and stylish look of Vikram, and his stunning stunts helped again with the background music of Kamal's favorite music director Gibran. This Change over scenes and style Vikram gets applause in theatre.

The stunts are the favorite of the body-loving Vikram, and he does it well to the pleasure of the audience. For each of his stunt movies, his fans show the jubilation and rock the theatre.

There is no boredom in any part or scene of the movie as was in the case of Thoongavanam if not better. Director delivered eaches scenes in a straight line without any confusion. All the actor's characters utilized adequately in this movie.

Also, the film to endorse its Hollywood style of filming done with a short duration of 2 hours. It enables the director to open up the suspense of who is Vikram and how he saves Akshara and family is done with great style and elegance.

Kamal Hassan takes only movies which he likes first and always loved by the Tamil audience. Kadaram Kondan is one such movie, and even Kamal would be jealous of the way Chiyan Vikram and his entire near and dear one perform in the movie.

Kadaram Kondan is not only a movie for the Vikram fans but all those who want to see a quality movie in Hollywood style in Tamil. Also, the critics will love the film as Thoonagavanam for the directorial skills of Rajesh M Selva.

Book the tickets now to watch the movie with the whole family. You will be surely proud of being a Tamilan to see such a beautiful western-styled Tamil movie on the screen. Kadararam Kondan is sure a milestone in Vikram's career.

- If you want short action movies, this is it.

- If you want Chiyan Vikram in Style and full action as like IruMugan? this is it.

- If you want twist and turns,  this will satisfy your needs.