Soorarai Pottru-Maara Theme is About to Release Tomorrow 4 pm 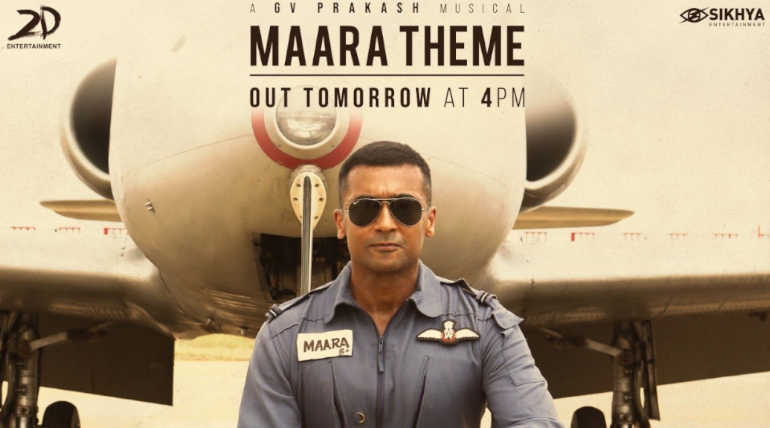 Soorarai Pottru-Maara Theme is About to Release Tomorrow 4 pm

"Maara" theme teaser from Suriya's "Soorarai Pottru" was released by G.V. Prakash: Music Director G.V. Prakash took to social Media the teaser of Maaran theme of the film Soorarai Pottru led by Suriya. In the video released actor, Suriya is seen humming his voice for the theme Maara and G.V.Prakash is seen composing the same.

Exotic visual it was and it has confined many eyes in the Social Media for a flick of a second. G.V. Prakash also declared that the most-awaited Maara theme would be released soon and all set for the same. This has reverberated the minds of Suriya fans. The fan-base does wait to freeze the moment. The makers of the movie released the teaser on January 7th. In two languages the film is scheduled to hit the screens.

Directed by Sudha K. Prasad, the movie will be released in Tamil and Telugu, and in Telugu, it would be named "Aakasam Nee Haddhu Ra." The movie is over, and the nitty-gritty of the things should be taken care of and expected to get released by summer. The two posters which were already released looked "Wao' and when the first teaser was released it has just prisoned the viewers and made them skip a beat.

Bollywood actor Paresh Rawal played the antagonist role in this movie, and he made his debut in Kollywood through the film "Soorarai Pottru." The project is bankrolled by Suriya and Guneet Monga under their banner 2D entertainment and Sikhya Entertainment respectively.

Greg Powell, who is identified as the international Stunt Choreographer winning an award in his profession choreographed stunts for this film. He is identified with his prowess in Fast and Furious 6, Skyfall, Harry Potter and the Deathly Hallows (1 & 2), Lost in Space among the others.

Aparna Balamurali plays the female lead for this movie, and Karunas and Kaali Venkat play supporting roles in this movie. Of late, Suriya's movies have not been spoken much, and this movie should be a turn around for him to leap forward from then on.