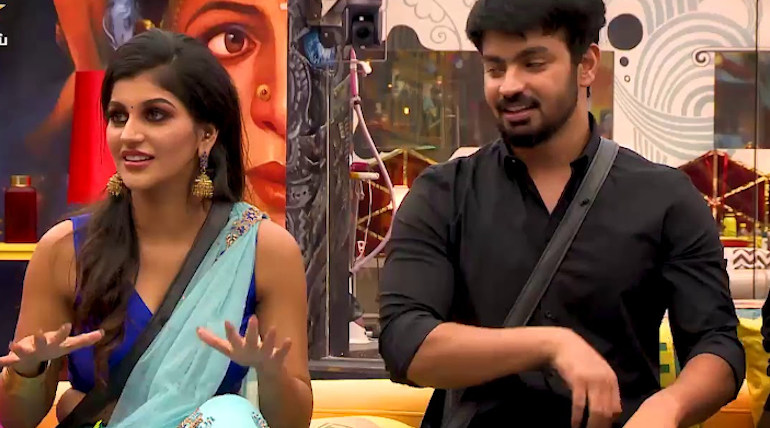 Big boss house made it possible says Yashika along with Mahat in big boss 3 Tamil house today. To make the long tiring journey of the big boss 3 house contestants, as expected, Mahat and Yashika came inside it. Further, many more of big boss 2 Tamil show contestants including the winner Riythvika along with Janani Iyer is also to join them soon.  Yesterday being a funny day in big boss 3 Tamil house, today with the new entrants it is going to be not only amusing but also entertaining to watch.

Young Mahat is a budding actor and a controversial character in the film world and big boss 2 house. Mahat and Yashika were like the current Kavin and Losliya. It is the trick of the big boss to confuse the audience and contestants with this brilliant move of bringing them old love birds of a big boss back again.

A warm welcome to Mahat & Yashika

Sandy master who must have known Mahat, greets the two old-timers back again into big boss 3 Tamil house. Losliya, Tharshan, and Mugen who are not familiar with them, seem reluctant in receiving them.  But Sandy is all guns to receive them, and Kavin takes a cautious approach. What these two and more of previous seasons big boss contestants going to do in the big boss 3 Tamil how in the last days is going to be interesting to watch.

Big boss organizers are going out blazing all guns to make big boss 3 Tamil show one of the best. Kamal said that the audience is saying that this 3rd season seems to be the best of all three seasons. Now with only the youth, and energetic contestants left in the big boss house and joined by the old contestants, it is going to be a treat for the audiences to watch the last days of big boss 3 Tamil show.