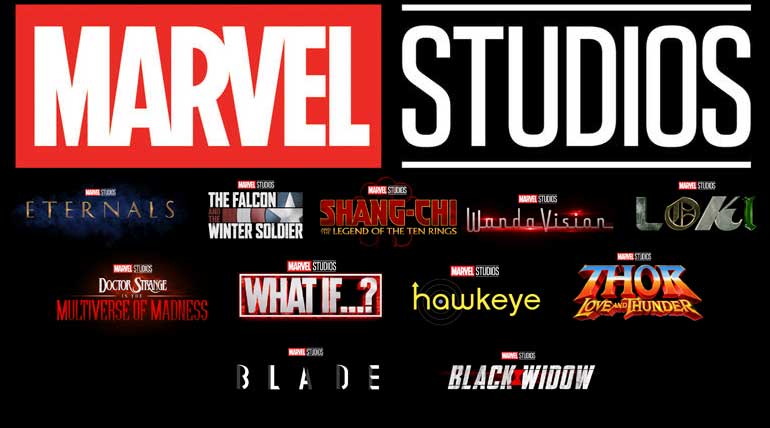 The upcoming movies of Marvel studios are unfolded along with the forthcoming surprises of Disney +.

The most-awaited information is unwrapped under one roof at San-Diego comic con 2019. Marvel studios staged its upcoming movies and TV shows in "Hall H" including what is in the pipeline from marvel cinematic universe and Disney +.

Let check MCU movies list. The next two years schedule is disclosed to the fans.

The Eternals: Kevin Feige, president of Marvel Studios, sparked the stage initially with the announcement of "The Eternals", the movie expected to hit the screens by November 2020.

He walked us through the cast and crew members of the film. The starrers are Richard Madden as Ikaris, Kumail Nanjiani as Kingo, Lauren Ridloff as Makkari, Brian Tyree Henry as phastos, Salma Hayek as Ajak, Lia Mchug as Sprite, Don Lee as Gilgamesh and Angelina Jolie as Thena. This movie will be directed by Chloe Zhao.

They both were on stage to greet the fans, and it was divulged that Daniel Bruhi would be back as a Villain. The Falcon and The Winter Soldier will come to Disney + in the fall of 2020.

Shang-Chi and the Legend of the Ten Rings Movie: The third in line is a classic Marvelâ€™s comics character making his first appearance in Shang-Chi And The Legend Of Ten Rings. Simu Liu takes the title role alongside awkwafina in an undisclosed part.

Tony Leung takes the real mandarin role. The movie will be directed by Daniel Cretton and will get screened in theatres by February 12 2021.

Wanda Vision: The sequence brings Wanda Vision as the next in line movie. Elizabeth Olsen and Paul Bettany reprise their MCU roles from the original series as Wanda Maximoff/Scarlet Witch and Vision in the Marvel Studio's upcoming Wanda Vision.

Teyonnah Paris would take the adult role of Monica Rambeau who co-stars in Wanda Vision. Teyonnah Parris was introduced as a child in Marvel Studios' Captain Marvel.

During the spring of 2021, Disney + will get the series Wanda Vision in its kitty.

Loki: The MCU's favorite trickster Loki is also making its way to Disney +. Marvel Studio's Loki, an original series lead by Tom Hiddleson, will see the god of mischief was causing more trouble in the spring of 2021.

It is expected that there will be a chain of sequential events connected between Wanda Vision and Doctor Strange In The Multiverse Of Madness. This will adorn the theatres on May 7 2021.

What Ifâ€¦? What if Comics already built its legacy. Marvel Studiosâ€™ What if, the first animated series in the MCU lot will have Jeffrey Wright as the voice of the watcher.

Many actors are repeating their roles as a voice talent. This will present the unleashed realities in the Marvel Universe and will bring you to spring in your summer of 2021 exclusively on Disney +.

Hawkeye: The next in line would be Hawkeye starred by Jeremy Renner from the lot of MCU expected to release on screen in the fall of 2021.

]This will introduce Kate Bishop, who has been creating her niche in the Marvel comics.

Taika Waititi will be the director, and he confirmed Jabe Foster as the Mighty Thor, the goddess of thunder. This will embellish the theatres on November 5, 2021.

The costars will be David Harbour as Alexei Aka, the red guardian. Florence Pugh as Yelena, OT Flagbenle as Mason and Rachel Weisz as Melina.

Cate Shortland is directing the movie "Black Widow" under the Marvel Studiosâ€™ banner is expected to hit the screen on May 1, 2020.

MCU schedule is expected to happen in sequence.