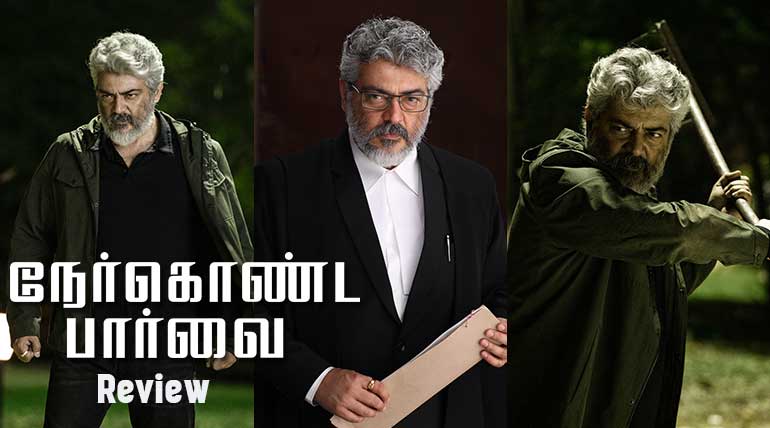 At last the long wait of Ajith fans has come to an end now. The fans are jubilated watching their semi-god on screen again. Today is the Deepavali for Ajith fans, and they are enjoying to their fullest satisfaction. The movie did not disappoint their wishes and only increased the tempo of the fans. Produced by Boney Kapoor and outstanding directorship of H.Vinoth makes the NerKonda Paarvai a compelling movie to watch not only by fans but also the public.

Ajith with Ner Kondra Paravai has gone one step more in his film career. From being theAjith movie many critics and fans have concluded that it is not Ajith movie but Ajith character movie. The way he performs the lawyer character to free the three girls in crisis is outstanding. The dialoguedelivery, facial expressions, body language, and that ticking cunning laugh will enthral the fans and general public again. The plot being therescue of three women in grave trouble will make the female audience flock to the theatres for Ner Kondra Paravai.

Alreadythe song of Ner Kondra Paravai being a big hit on the internet, the movie brings in the other special of Yuvan, the BMG. NKP second part being more of conversation Yuvan brings in his magic of BMG to highlightthe importance of certain dialogues which are vital for the movie moving forward. Hence it has to listen carefully for having the total satisfaction and enjoyment of Ner Kondra Paravai .

Book your tickets now for a fantastic family entertainer Ner Kondra Paravai to explore the extraordinary talents of Thala Ajith.