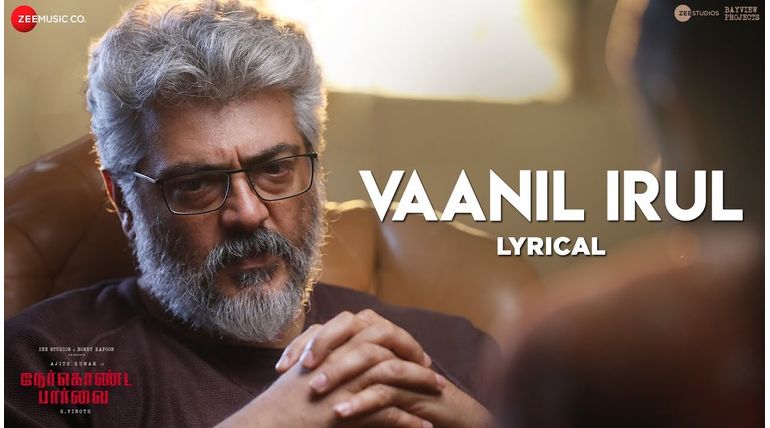 Ner Konda Paarvai First Single Vaanil Irul is officially out now for the audience. The team launched the lyric video of the soulful song without much noise early morning today on YouTube in Zee Studios channel. The song is composed by Yuvan Shankar Raja and sung by Dhee. It sounds like an instant addictive material from the team. The lyrics written by Uma Devi caught the curiosity with some powerful lines for society.

The single announcement was made by Wednesday evening and released on Thursday morning. The melody is expected to be the only song in the movie and another song between Ajith and Vidya Balan is said to in the film as per the sources from the team. Ner Konda Paarvai is an official remake of Bollywood film Pink which stole the audience with its socialised concept and bold making by Shoojit Sircar.

H.Vinoth is directing the Tamil remake with Thala Ajith produced by Boney Kapoor. It is Thala who chose to do this remake and recommended the young director for the film. The team is playing a silent game without big bang promotions being a biggie. The audiences are eagerly waiting for a game-changing film from a star actor like Ajith Kumar.

Watch the breezy lyric video with some socially responsible lyrics and visuals of Thala Ajith Kumar. It well conveyed the intensity of the film of how it would be. Fans are geared up for a watching a soulful low budget film without commercial elements starring Thala after a long time. The movie is said to be released by August 1st week changing from the officially announced date of August 10.