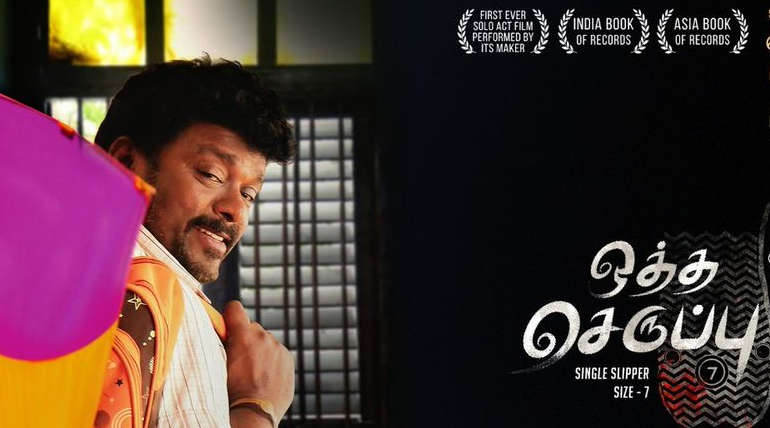 Oththa Seruppu Size 7 never received even Oththa negative review.  That is the success of Parthieban's excellence at its pinnacle.  Oththa Seruppu means of no use but watching Oththa Seruppu can bring you a lot of use in life. Never in the world cinema, this kind of attempt is done by anyone, but R. Parthieban not only tried it but is successful and gets a load of applause.

Many reviews confirm it as a world-class movie and set to bag many awards, both national and international.  Hats of to R. Parthieban and everyone should watch this movie is the comment of most of the audience who come out watching the movie.

Parthieban is the Oththa Seruppu of Oththa Seruppu movie. He is the director, producer, writer and also the only actor in the movie. Read it again, the only actor with no other character on the screen except for the voices. But, it is the breathtaking skill of Parthieban to bring to your imagination all the characters live from their voices.  The storyline is a murder mystery being unraveled by the investigation of Parthieban.

First, he is reluctant to explain what happened but starts to speak and completes it only after 105 minutes of what happened and why he is innocent.  The audience has no other way but to switch off their mobiles to not miss even one dialogue of the movie to enjoy it fully.

A great movie like Oththa Seruppu needs assistance which is best to the core. And that is what Parthieban has got from the geniuses of the Indian film industry like

Never miss seeing this movie on the big screen as it will give an experience which cannot be explained in words.