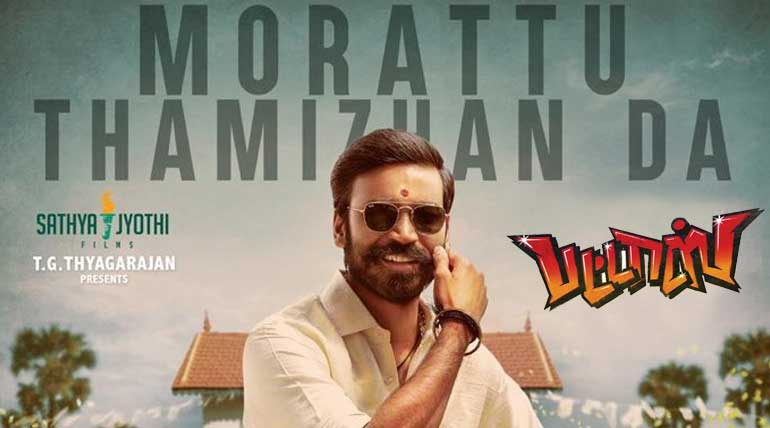 The recently released "Chill Bro" song by Vivek-Mervin has gone viral on social media. Dhanush fans are taking different dance beats to choreograph Chill Bro and making it as one of the TikTok sensations. The song Chill Bro has been considered as the mass opening for Pattas promotions but the motion poster of SathyaJothi films created goosebumps among Dhanusians for the look and swag.

Producer Thiyagarajan and Pattas whole team have announced the second single release of the movie to hit the small screens and gadgets today and the song titled Morattu Thamizhan Da seems powerful in Vivek's Lyrics composed by Vivek Mervin. The Dhoti look of Dhanush in the motion poster exhibits that the second single song connects the home ground role of National award-winning of the international actor.

Dhanush joins R.S.Durai Senthilkumar director for the second time in Pattas after the huge successful storyline Kodi. With the same filmmaker, sources reveal that the actor plays a dual role again in this upcoming movie which blocked theatres screens on January 16th,2020 for the Pongal Celebration.

Always Singer Dhanush's song and lyrics get special attention from fans all over the world right from 'Why this Kolaveri ' and Chill Bro is not an exception. To add the hit list of the music player, Dhanush-Vivek boldly releases Morrattu Thamizhan Da from Pattas.

After Puthupettai, actress Sneha joins the cast of Pattas with Dhanush. The film shot in Coutrallam and Naveen Chandra played the baddie role against Hero Dhanush to reach the climax mode of the flick.

Though Pattas packs up on one side for the January release, Dhanush-Karthi Subbaraj untitled D40 film wraps first half in London and continues to shoot till mid-January under the banner of Y not Studios goes on the floor after Pattas cracking on the silver screen.