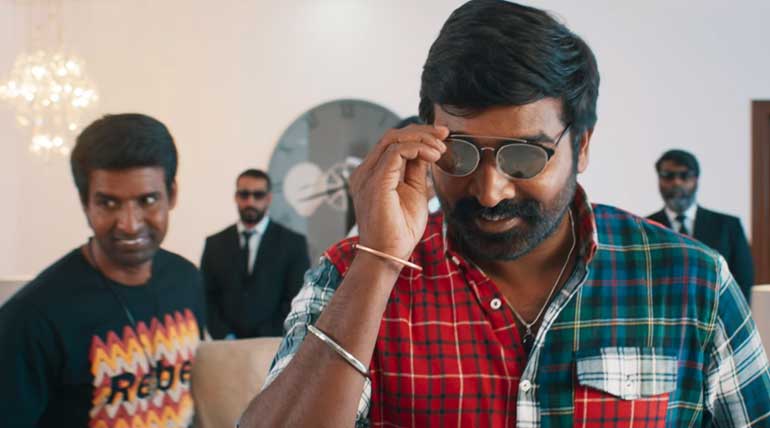 After a long struggle, Libra productions were able to release Sanga Thamizhan yesterday night only to get some average reviews today. But without any effort, Tamilrockers, as usual, was right on target to leak it online first thing today morning. Vijaya Productions, Vijay Chander, and Vijay Sethupathi all have to only blame themselves for taking Sanga Tamizhan in such a way for not making a good impression on the first day. To add to their woes, Tamilrockers have now leaked it online for the others to watch it only on their smartphones and laptops rather than spending substantial ticket costs for seeing it in theaters.

Vijay Sethupathi was much acclaimed from Pizza for his variety of roles without any concern for hero-worship or mass following. When he tried it in Sanga Thamizhan, which has been leaked by the Tamilrockers in the name "Sangathamizhan HD Movie Download," with much hype and delay is costing him dearly with today's reviews of Sanga Thamizhan. He was adored for many roles without any build ups or hype to his character in the films.

Even Vikram Vedha or Chekka Sivantha Vanam, which were great hits of recent times, did not portray him as a mass hero. He did justice for the roles and was rewarded accordingly. But when everyone wants to become MGR, today's situation to Sanga Tamizhan is bound to happen again and again.

Sanga Tamizhan is Vijay Sethupathi's first double-action film. He is a villager fighting the corporate world and a police officer fighting goons. The platform is well set for Vijay Sethupathi by director Vijay Chander and well spent by the producers legendary Vijaya Productions. But only the stunt master Anal Arasu, Cinematographer Velraj, and to some extent, comedian Soori score in the movie. Vijay Sethupathi, who dazzles in fantastic characters even in small portions, fails to impress the audience for the 150 minutes shown on the screen. Vijay Mervin's songs are a bit of relief for the audience to sit in the theaters.

Recently, the production house of Sanga Thamizhan has filed a case against Tamilrockers for pirating movies and leaking online. Amid the complaint, Tamilrockers have leaked some most recent movies like Marjaavaan, Vishal's Action, Tenali Ramakrishna BA.BL and Jack and Daniel on November 15, 2019.