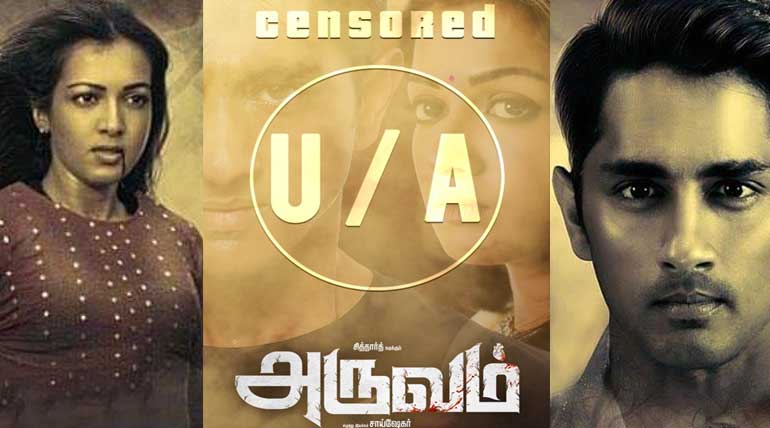 Siddharth Aruvam movie got Censored U/A: Aruvam team's PRESS meet, on the eve of its release tomorrow on 11th October, has hyped the movie among the audience. This Sai Sekar directed film starring Siddharth and Catherine Tresa is all about food contamination.

Siddharth plays the strict food safety officer in the movie and has more than 37 minutes of VFX scenes to portray the figureless nature of the film, which is the meaning of "Aruvam". The movie will try to say to the public that even the purest of all, mother's milk is also getting contaminated in this modern world.

Sai Sekar & Trident Arts Ravi: Trident Arts, Ravi produces Aruvam giving a free hand to all concerned for its whole production. Sai Sekar, is in the Tamil field for a long time as an assistant director and taken a Telugu movie previously. Though Aruvam is his full-fledged movie, he has enough experience to make such a quality social action movie.

Siddharth - professional and dedicated actor: Siddharth as an assistant director started his career with Mani Ratnam, is a professional and dedicated actor now. Though not with many hits, he is well acclaimed for his quality acting for nearly two decades. His action as the tough food safety officer in Aruvam will bring him much acclaim due to him so long.

Sathish, Catherine Tresa & crew: Sathish, a famous and timing comedian with laps tick dialogues, will add value to the movie. Catherine Trasa acting in the female lead role and without the sense of taste or smell will be the game changer of the film.

Thaman, Ekambaram & VFX: Thaman scores the music for the movie, which has two songs. The movies being based on the figure is well caught in camera by Ekambaram, the cinematographer of the movie. The main attraction of the movie, 37 minutes VFX scenes to bring out the figureless characters of the movie alive.

The storyline on the ill effects of food contamination, which could change the human figure, could be interesting to watch on the big screen from tomorrow, 11th October.