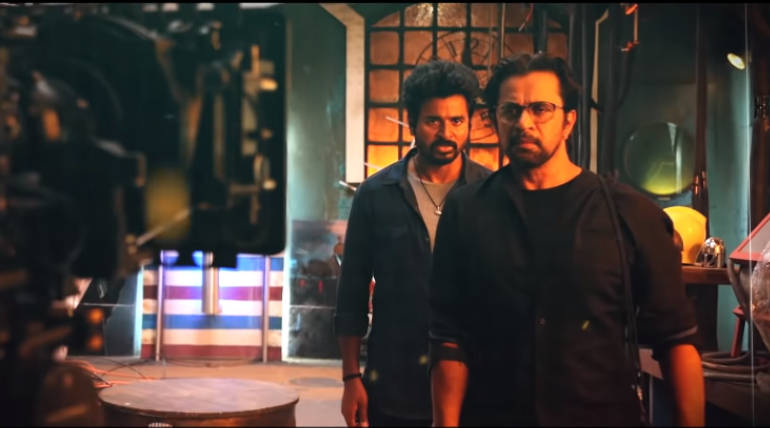 Moviebuff's sneak-peek highlights the intriguing scenes of any movie creating the fans' eagerness to step into the theatres for the whole on-screen drama delight.

Unlike the sneak peek leap on the internet, P.S.Mithran directorial action drama thriller Hero produced by Kottapadi J Rajesh under KJR studios promotes the superheroic films behind the scenes as Spotlight in Moviebuff screens.

The spotlight highlights the whole Hero team's effort and on-set entertainment with the crew members. Starting from the first clap sound of the Hero team, the making video portrays the journal to be more active with superheroic thrills and action sequences then and there. Action king Arjun seems undergone some flashbacks story which inculcates via Sivakarthikeyan's work process and how Sk meets the antagonist Abhay Deol twirls in the spotlight with a leap of Arjun with some leg injury.

Choreographer Sathish bends the Hero more to dance delight the audience on the screen, which reflects in the making effort of the dance master and co-dancers. Robo Shankar sets his comedy skill alive after Raja's Velaikkaran with Sivakarthikeyan again in Hero, co-starring Kalyani Priyadarshan.

Actor Sivakarthikeyan film has become a children's favorite film creating rage of undoubted U censorship through film certification. Rather now, Hero movie never failed to do justice for kids prompting the educational system and its corruption world. Sivakarthikeyan's superheroic film dream started after Director Shankar's visual excellence, and Hero is one such inspiration to hold the silver screens.

Hero directed by Irumbithirai creator PS Mithran, the film music is composed by Yuvan Shankar Raja and stars Sivakarthikeyan, Arjun, Kalyani Priyadarshan, Ivana, Abhay Deol, and Robo Shankar. Will the film, which was produced in the George Williams cinematography, editor Ruben, be another hit for Sivakarthikeyan? Let's see on the silver screens for this December 20 Christmas week over.