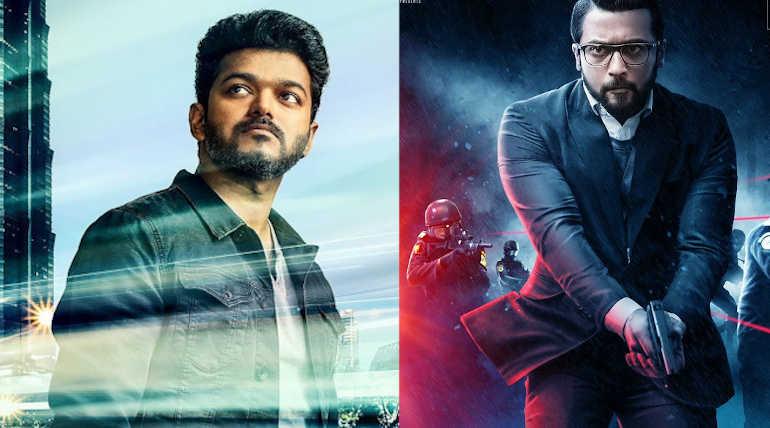 Thalapathy Vijay and Suriya Sivakumar meet the silver screen together after nine years.

Succeeding the blockbuster hits of Kaapaan and Bigil in the 2019's festive season, the sensational actors of Kollywood are back to meet the silver screens for early 2020. After the 201's same date release of Thalapathy Vijay's Velayudham and Suriya's Ezham Arivu, both are getting ready to meet in theatres for this summer holidays in 2020 with Lokesh Kanagarj's Thalapathy 64 and Sudha Kongara's Soorarai Pottru.

Cracking this Diwali with Thalapathy Vijay's Bigil directed by Atlee co-starring Nayanthara, Vivek, and Kathir, Thalapathy fans are eager to witness another Vijay's film with a leap in 2020. Director Lokesh Kanagaraj directs Thalapathy 64 after establishing himself again in Karthi's Kaithi a year after Maanagaram. Setting a space in the Tamil Cinema industry with two films, Lokesh Kanagaraj gets ready to confer himself as a hit film director through Thalapathy 64. The movie shoot happens with full swing in New Delhi with the cast and crew after the blockbuster hit of Bigil. Thalapathy 64 co-stars Malavika Mohanan, Shanthanu, Antony Varghese, Andrea, and Gouri Kishan. The film is scheduled to release in April 2020 with Anirudh Ravichander's background score. Meanwhile, sources reveal Thadam director Magizh Thirumeni to team up for Thalapathy 65.

Suriya Sivakumar's action continues right from Varanam Aayram to recently released Kaapaan. Being unveiled the bodybuilder first look freshly, Soorarai Pottru is not an action drama, unlike his previous films. Irudhi Suttru director Sudha Kongara is back with her unique story style plotting Soorarai Pottru's as a biopic of G.R.Gopinath, Retired Captain of Indian Army & Founder of Air Deccan. Twirling the army man's story must be the reason for Suriya's fitness and roots unveil that story lands with the real life of G.R.Gopinath.The first look triggers the fans waiting for the teaser and movie tuned by G.V.Prakash Kumar.

Kollywood's sensations Vijay and Suriya take charge to entertain the summer holidays undoubtedly. Soorarai Pottru touting starts slowly after the dubbing process while Thalapathy's 64 is in the shooting mode after the actor and the director's blockbusters Bigil and Kaithi.