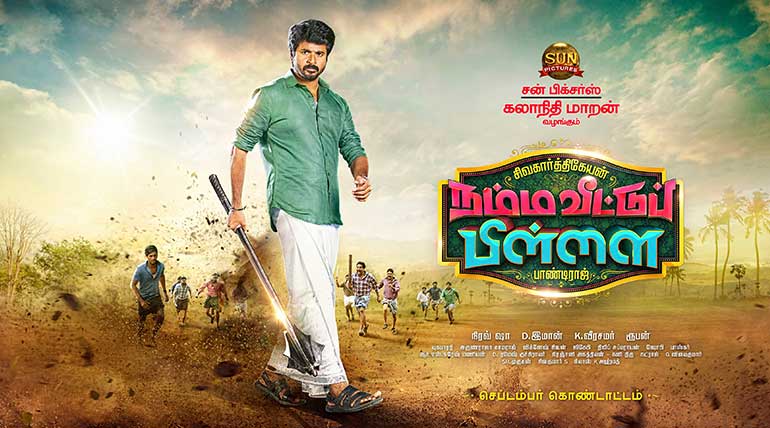 Siva Karthikeyanâ€™s SK16 name is out as "Namma Veettu Pillai"

Sun Pictures Production's "Namma Veettu Pillai" first look is released, and Siva Karthikeyan looks draped in Dhoti and shirt. Gives us a feel that it is a village-oriented story which would be a rural entertainer to us. The director Pandiaraj who introduced Siva Karthikeyan in "Merina" movie directs this movie. The same director directed "Kedi Billa Killadi Ranga" super hit movie also done with Sivakarthikeyan.

The duo chemistry in both these movies worked well, and for the third time they joined hands to work together in "Namma Veetu Pillai". In the first look poster, it is mentioned as (September kondattam) which is translated as "September Celebration". Hence the movie is expected to release on September.

The co-stars in the movie are the upcoming leading actress Aishwarya Rajesh, Samudhra Kani, Bharathiraja, Anu Immanuael, Archana, Rama, Suresh, Suri, Yogi Babu and Vela Ramamurthy. The cinematographer is Niravshah, and the music director is Imaan. Everybody expects Aishwarya paired up with Siva Karthikeyan, but sources said differently. Aishwarya Rajesh plays the role of Sivaâ€™s sister and who pairs up with him is still under wraps.

The works are going in a faster pace, and the movie is at the fag end to get released. Sources also say that this movie will be "pooja release" that is expected to happen on October 2nd. This is a rural entertainer and for Siva this is not the new tune. Initially, there was information in air that the name of the movie is "Yenga Veetu Pillai" the famous title where Puratchi Thalaivar (Iconic leader) MGR starred. Later there was no news about it.

No official confirmation so far on the release date, but it is expected during pooja days. Meanwhile, Siva Karthikeyanâ€™s upcoming movies are Hero produced by KJR Studios. He also has other films in pipeline with Ravikumar and Vignesh Shivan.