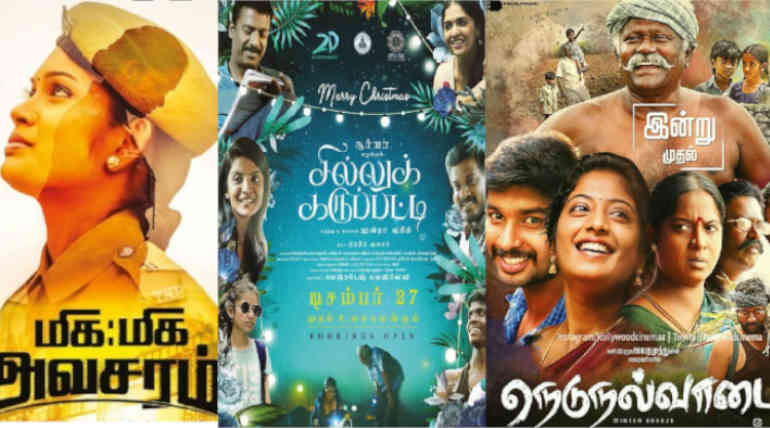 Stories are the real hero for movies from its time of invention. They are like the soul to the movie, and all others are just ornaments to decorate it. Without a doubt, only stories have made the box office coffers ring more for all great films worldwide. It also enhances the performance of all other departments of the movie-making to make movies successful both financially and critically. Also, it is the stories that have brought to the limelight great artists across the world.

In Tamil movies, stories have been the backbone of all great movies. Even the captain of the ship, the directors only on the right story selection, has given beautiful movies. In 2019 six such movies were detailed here.

This wonderful sophomore anthology movie by Halitha Shameem is a combo of four movies, all with one thing in common, love. The tenderness of the movie makes it different from the others. The highlights include

Peranbu is about anbu or love in many dimensions written and directed by Ram. From the fake love of two of his wives, the protagonist finds real love with the third wife. In between is the main story of his love for taking care of his young muscular disease affected daughter as a single father. The difficulties he faces is the story and also about how he finds peace with it. Love unlimited Peranbu will be cherished in the viewers' minds for a long time.

K P Jagan's story of Miga Miga Avasaram is a real-time issue of women in employment. It is a long time that a movie with the most appropriate title has hit the big screen.  A lady constable emergently wanting to have a pee during her duty time and how she is harassed by her superior office of not allowing it is the one-line story. But it is taken well by the director Suresh Kamatchi.

R.Parthiban's one-person show, but an excellent one is Otha Seruppu. The story is about how the modern-day gimmicks make women fall out of their morality is the one-line story. How money, and luxury glitters even turns a mother to cheat her husband and go to the level of killing him, is well explained in the husband's point of view. Also, the cleverness of the story is how well the Parthiban fool's the police to lock them in the story and get freed for his killings to take care of his dying son.

Written and directed by Selvakannan, Nedunalvaadai brings back the fragrance of love between grandson and grandfather. It also speaks about the pain of separation between a man and his wife.  It casually deals with caste, village roots, responsibilities, and even the cultural and attitude differences between husband and wife in a profound way.

Vetrimaran pens and directs this fantastic movie speaking about the responsibility of the father in adverse situations. Also, it talks in brief about the oppression of money and caste. The protagonist character well displays the weakness of a village father and how he later does anything to save his son.  Life of the oppressed to protect their piece of land from the mighty of both money and caste is the bottom line to show how a father could love their children is well brought by Vetrimaran in both the story and direction.