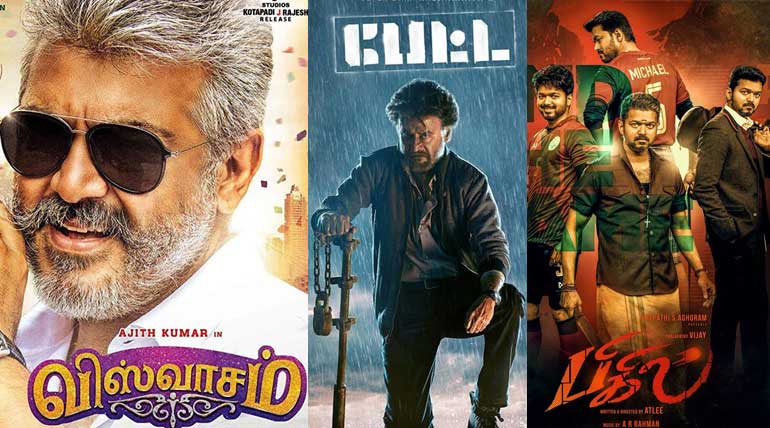 We have collected data from theatres in Coimbatore and Karur to make the genuine report of Top Grossing Tamil Movies in 2019. Based on real data collected from our 12 screens, which released Tamil movies with equal seat allocation in each screen for all the films and from the total collection of Online tickets and Boxoffice tickets report.

In India, 2019 is all about protests, economic twists, and fall in GDP, Pollution, the long-awaited guest Northeast Monsoon and the unexpected guest, the rise in the prize of onion. Apart from the above said, Indians never failed to be amused by the movie that released in the year.  Now, we have presented a list of 10 films that were celebrated by the Tamil audiences, and that become the highest grosser of the year.

Here, in this list, the movies that are arranged in an order that collected more money rather than their story base.

The fourth action blockbuster from the combination of Siruthai Siva and Thala Ajith. Holding high end casts like Nayanthara, Anika, and Jagapati Babu in the lead roles, Viswasam ranks the third in the collection. A moderate action story revolves around father-daughter sentiment Viswasam paid enough to Sathya Jyothi Films that funded the movie.

Yet another sports film for the Indian Cinema Industry, Bigil, is the highest grosser of 2019. We can simply say it is humongous 300 crores, including all the theatrical, digital forms of collection. Directed by Atlee Kumar and starring Thalapathy Vijay in the lead Bigil holds not an extraordinary story, but it is quite good. The star power of Vijay has gained a huge victory for Bigil and hefty profit for Kalpathi S. Aghoram.

Such a comeback for Superstar Rajinikanth. Petta is the second-highest grosser of 2019. Produced by Sun Pictures and directed by Karthik Subburaj, Petta has a moderate revenge story with high-end actors in it. Vijay Sethupathi is another plus for this movie, who debuted as a villain against the industry's topmost hero.

Asuran is the conqueror of the box office. It emerged to the screens on a normal Friday and won the hearts of the audiences with its story, acting, and action. The story rises from the novel Vekkai that speaks inequality in society in the boldest manner. Directed by Vetrimaaran, Asuran stars Dhanush, Manju Warrier, and TeeJay Arunasalam and bankrolled by Kalaippuli S Thanu. Though Asuran spoke a lot of politics and communism, it became a part of the 100 crore club as soon as it hit the theaters.

Kaithi dropped in with Bigil during the Diwali and got thrashed by the opposition for a couple of days. Later, Kaithi gained momentum and stood as the winner of hearts and become a part of the 100 crore club. Directed by Lokesh Kanakaraj, Kaithi has an intriguing thriller storyline. Apart from a thriller story, action sequences in this movie have a great contribution to take it to the elite club. Funded by Dream Warrior Pictures, Kaithi had become one of the top grosser in 2019.

Nerkonda Paarvai stars Thala Ajith in the lead, which is the character of a lawyer who fights for three young women in a sexual assault case. Dubbed from the Bollywood's Pink, Nerkonda Paarvai was truly a hit in Tamil Nadu just because of the star value of Ajith Kumar. Funded by Boney Kapoor and Zee Studios, this movie entered the elite club as fast as it could.

Namma Veetu Pillai is the first-ever film of Sivakarthikeyan that entered the elite club. Released in late 2019, Namma Veetu Pillai won the hearts of audiences through its sentimental dialogues. Directed by Pandiraj and funded by Sun Pictures Kalanithi Maran Namma Veetu Pillai is a modern version sibling story. Bharathiraja, Soori, Natarajan Subramaniam, and Anu Emmanuel are the primary contributors to the success of this film.

Yet another elite club movie of 2019 that brought a nostalgic feel across the minds of 90s kids who watched the film. Comali is the story that showcases the generation that lived in the 90s and their life that differs from the current situation. Though the above-said theme drops only in a few parts of the movie, Somali is all about a 90s kid who comes to consciousness after 16 years of coma and the difficulties he faces in the modernized society. Comali is directed by Pradeep Ranganathan and funded by Ishari K. Ganesh holds Jayam Ravi, Yogi Babu, K. S. Ravikumar, and Kajal Aggarwal in the lead roles.