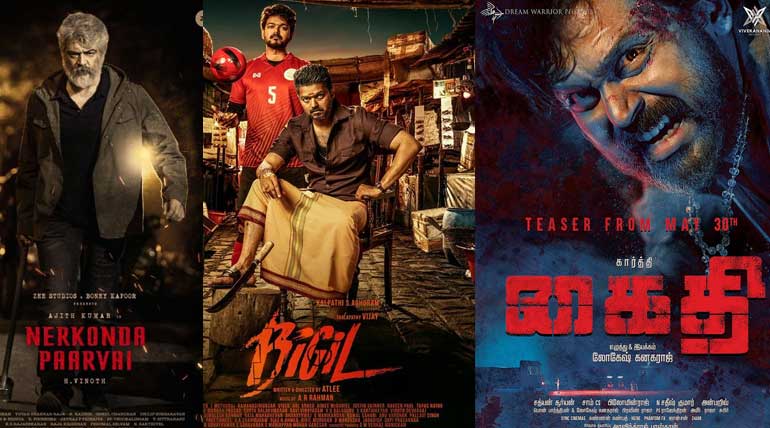 Thala Ajith is, doing the Tamil remake of the Bollywood movie Pink. Ajith is acting as a lawyer. Also, Abhirami and Shraddha Srinath have been cast in the film. While the film was earlier slated to release on August 10, the release date of the film was changed following the reception of the film's trailer.

Kaithi is an eagerly awaited film of the year. It is expected as a promising film for Karthik, who has been giving a flurry of films after the Theeran official. The film is expected to hit the screens on August 18. But the release date of the film seems to be postponed as the date nears. Lokesh Kangaraj directed Kaithi might release somewhere around September.

Surya's recent releases are not receiving much reception among the audience. This includes his previous releases TSK and NGK. Currently, Kaappaan is awaiting the release directed by KV Anand and produced by Lyca. The action entertainer film is expected as a fan favorite and slated for release on August 31.

Following the film Kodi, Dhanush is acting in the double role as Marithevan and Kali. Manju Warrior has co-starred with Dhanush in the upcoming film directed by Vetrimaran.  The film is set to release on October 2 Gandhi Jayanthi day.

Finally the most awaited biggie is here. Vijay is playing the role of  Football player and Coach in the Atlee directed film. Nayanthara is paired with Vijay. Also, Kadir, Vivek, Daniel Balaji, Yogi Babu and Induja are doing significant roles in Bigil. Music being composed by AR Rahman, the film is set to hit the screens on Diwali festival. It is noteworthy that last year Sarkar's film was released on Diwali and emerged as Top grosser of the year.