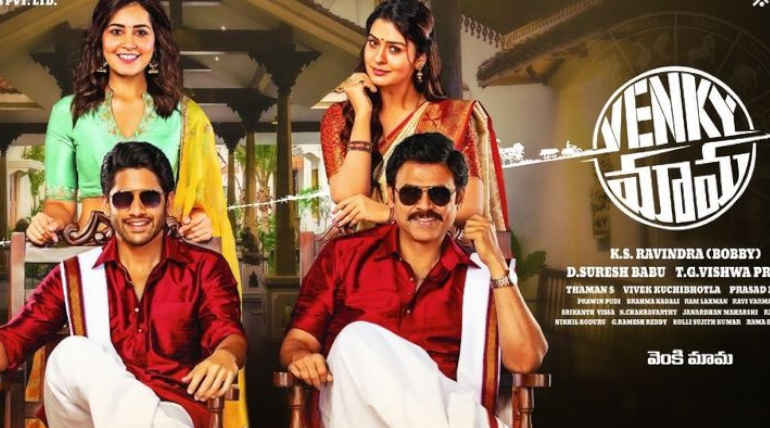 Box office hit buster Venky Mama piracy caught on the Travel bus: Venkatesh Daggubati and Naga Chaitanya staring Venky Mama hit the box office collection in its first weekend. Though the joy renders on one side with the blockbuster comedy action depicting mama-alludu storyline bangs with the piracy play caught in a bus.

Before night Jabbar bus riding on the roads towards Mysore has been caught red-handedly for screening the recently released and running movie Venky Mama on their television.

Considering the film is still in theatre screening with only a week release parallelly played on the bus screens against the law created hype to celebrity Venkatesh and Chaitanya fans traveling in a bus to complain police about the unethical act of the travel bus.

Countless similar issues of movie piracy viewing in mobiles, laptops, and public screens within two or more days of release occur frequently, and Venky Mama creates a buzz with the latest Telugu films caught up.

The trend of going theatres for the weekend remains unchanged in the growing generations, however, the old flick freaks making feet on theatres to watch the film reduces day-by-day, and this kind of movie piracy makes them numb further affecting the collection of any drama in the big screens.

Despite the issue, Venky Mama grosses 12.20 crores on its first day of release worldwide with noteworthy pre-bookings as an opener in Tollywood.

Venkatesh and Naga Chaitanya's first film together highs in emotion and comedy, setting comedy action drama to build stronger relationships of uncle and nephew. Analyzing the trade factor in the next two days, Venky Mama seems to count 36 crores in three days all over the world, making distributors and producers fly in colors since the remains are to be shared as profit.

Nizam of Hyderabad tops the distributor and producer earnings with a decent number of 8.60 crores in theatrical rights and 6.64 crores in earnings with a global total of 36 and 20.96 crores in its rights and incomes recovering 58 percent of Venky Mama's investment under the banner of People Media Company and Suresh productions.