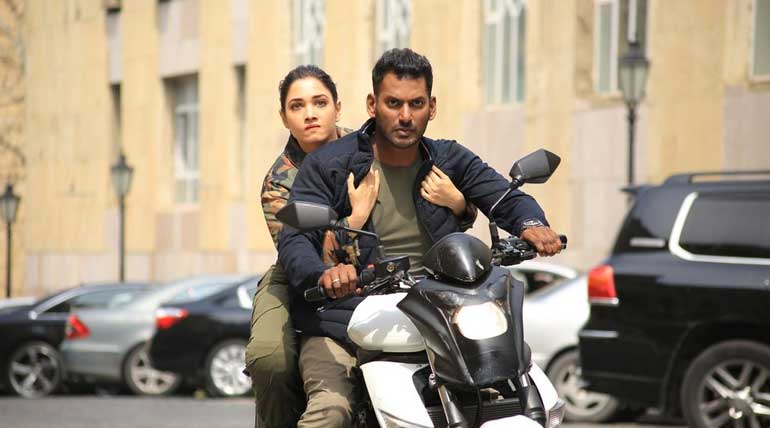 Vishal November 2019 Release Action Movie Trailer: In the upcoming movie, "Action," Vishal pairs up with Tammanna with Sundar.C directing the film. The film's trailer has high octane scenes which showcase Vishal as a cop. Most of the locations shown are foreign, especially London, and Vishal, is introduced as Subhash. He takes on terrorist gang and Yogi Babu with Tammanna, helping him in his progress.

"When the brave rise" is one of the captions shown but not completed. Very nice action package movie, and Tamanna looks stoned face as an officer, which suits her well. Yogi Babu sails in the comedy lane entertaining the audience, helping Vishal. Most of the scenes are serious interpolating Tammanna's dance.

Ramki, Chaya Singh, and Aishwarya Lekshmi are also appearing in prominent roles. Looks like Tammanna engages in full action like jumping off building with Vishal, taking on car fight scenes. Hip hop Tamizha's music is mesmerizing. Intoto, Sundar.C has given a package with full of actions blended with comedy and entertaining music.

Finally, Yogi Babu's cracking a joke that "Is it necessary that only action king Arjun should steal your money?" takes us through a reminiscent of Vishal's previous movie "Irumbu Thirai." Overall the movie is getting released on November, and Vishal's, and Sundar.C's fans are awaiting an action package.