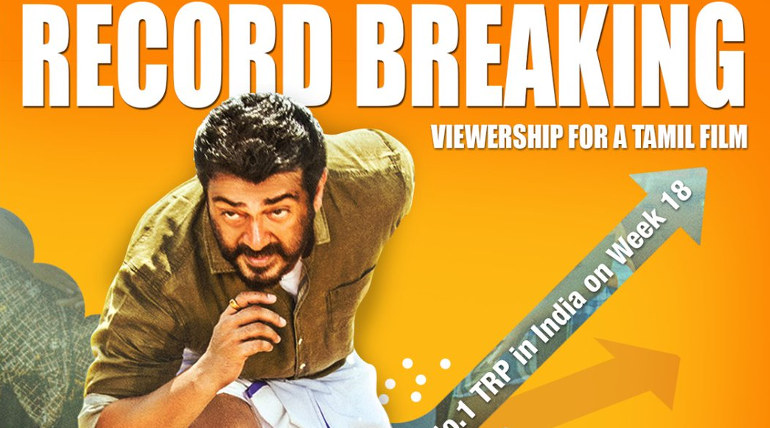 In the current cine market conditions, movies in the sentimental genre would hardly get a name and fame. In case, if it does so, we canâ€™t expect much returns in the box office collections. Only actors who are just growing up in the cine field would do such kind of films to take it as an opportunity to express their performance. While, Technology, Thriller and horror based movies are giving big hits in theatres, sentimental and sensational movies donâ€™t even get a proper recognition unless until it is brought up by a reputed and mass hero.

One such movie is Viswasam done by Thala Ajith in Tamil Cinema industry. The Pongal released movie is till now the talk of the cities. It is surprising to look at a big mass hero like Ajith doing a light-hearted film which even though a commercial one but the more focus is provided on the father-daughter relationship and it is excellently portrayed by both the characters in each and every scene that brings great applause from the audience side.

In accordance with this, most of the audience said that it has been a long time to watch one such movie in Tamil cinema as it turned the attention of the family audience all over the state and that is the main reason for its Everest Peak success. Particularly, Ajithâ€™s Climax scene performance is extraordinary and unforgettable as it brought tears in the eyes of the audience. Also, at the end of the movie, the actor conveyed a highlighting message, "Parents should not impound their desires on their children and let the children grow up according to their dreams"

Viswasam is the fourth film in the combination of Ajith and Director Siva, followed by heroism, Veeram, Vedalam and Vivekam. The film's producer D.G. Thiyagarajan has reported in a recent interview that the film has grossed over 130 crores. But, it is expected to have crossed 200 crores. This film has been translated into many languages â€‹â€‹due to the huge success in Tamil. In these occasions, Lining up with Ajith's birthday on May 1, the film was telecasted in a private television. An interesting point to note out of it is that the film which created a record-breaking hit in theatres also made a record in TRP rating.

Generally, the TRP rating for TV shows is displayed on websites a week later. According to this, more than 1 million and more than 80 lakh fans have watched the movie. It is noteworthy that all the TRP recordings of films have previously been broadcast on TV are broken. Following this, Ajith fans are sharing this tremendous achievement and trending the same in social media.