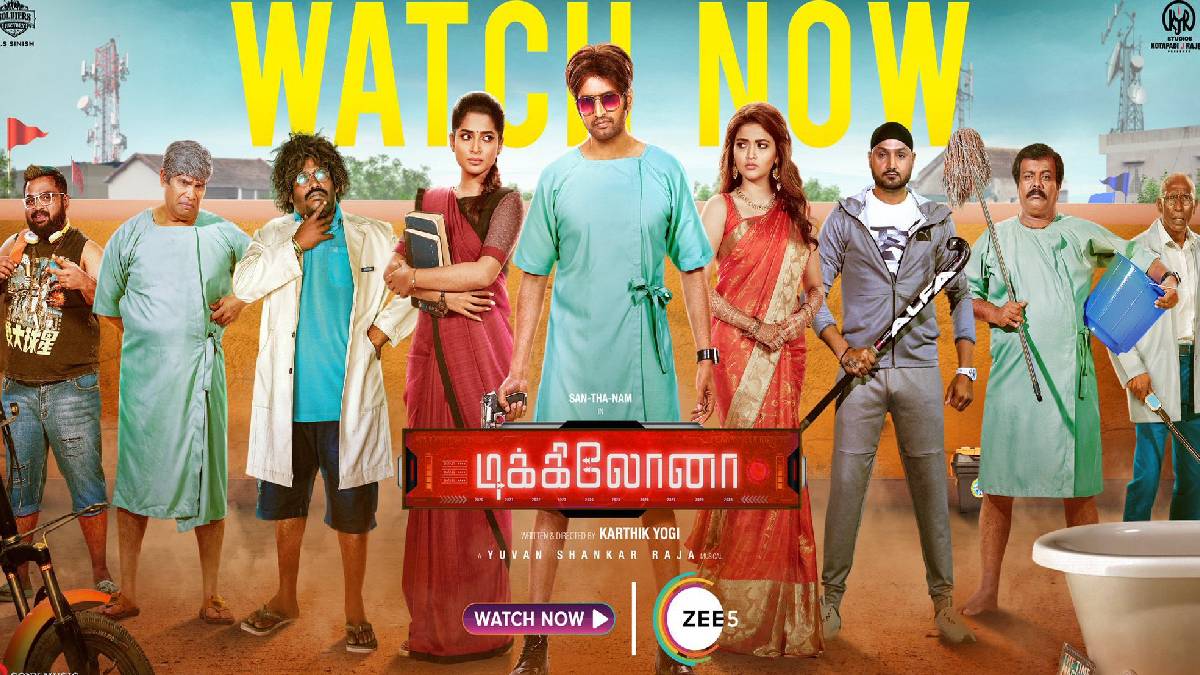 Dikilona is a time travel film directed by Karthik Yogi and starring Santhanam in three different eras. The film is co-produced by KJR Studios and Soldier Factory. The film was released in Zee5 on September 10.

The film keeps receiving good responses as the film is a scientific comedy film. Although Santhanam is a lead hero, he never failed to give timing comedies. The film tells the journey of Santhanam in the time travel machine. He begins his travel to change the current happenings which will disturb his peace.

Actor Santhanam will use a time machine following the circumstances, which will help Santhanam to travel between 2020 and 2027. With this, he goes to 2020 and seeks to stop his marriage. Did he eventually stop his marriage? Coming back to 2027? It is the rest of the story of the film.

Santhanam is getting married in 2020 to the girl he fell in love with. Santhanam, who thought he wanted to be a hockey player, worked as an EB man since he could not win big. And he is living in despair as his married life runs without peace.

The lead heroines Anagha and Shirin Kanchwala has done justice to their role. The emotional scenes are equally balanced throughout the film. Yogi Babu has given his best humour as a Scientist. Although he comes in fewer scenes, his role is much important in the movie.

In the beginning, Santhanam will wish to stop his marriage with Priya. That is when two Santhanams will appear on the screen. One will be the groom, and the other will be the one who entered inside the Time machine. In the next scene, groom Santhanam goes to his future and sees all the misunderstandings between Priya and him after marriage.

Third, Santhanam will be Megna's husband. Meghna is the friend of Priya who attracts Santhanam with lovely soothing words. He thought that he ill be happy, but many unexpected sequences will follow up next. During the climax, all the three Santhanam will meet together and decides on who to marry? Whether the marriage must be stopped?

The acting of Anand Raj and Munishkanth is a big strength for the film. They act so funnily throughout the film. Their comedy is of great help to the screenplay flow. Cricketer Harbhajan Singh has been impressed with the motivating role. Although his role in the movie is for few minutes, it is so inspiring and meaningful.

Director Karthik Yogi directed the film with a focus on time travel. It isn't easy to deal with the screenplay in stories like this, but the director delivered the content neatly.  But still, there seems little chaos in between, which disturbed the plot.  The only negative in the film is the timing. The film timing could have been reduced by cutting off the unwanted scenes.

The music of Yuvan Shankar Raja is one of the strengths of the film. Background scoring has come out beautifully with his music. The emotional scenes and funny scenes feel complete with YUvan's music. The remake of the song "Per Vachalum Vaikama Ponalum" grabbed the attention of many. Arvi has done amazing work in cinematography with the edit of Jomin in the film Dikkiloona.

Dikkiloona will be a turning point in the film carer of actor Santhanam. Watch Dikkiloona Tamil full movie on Zee5. The film can be watched and enjoyed with family as the film has no adult content.