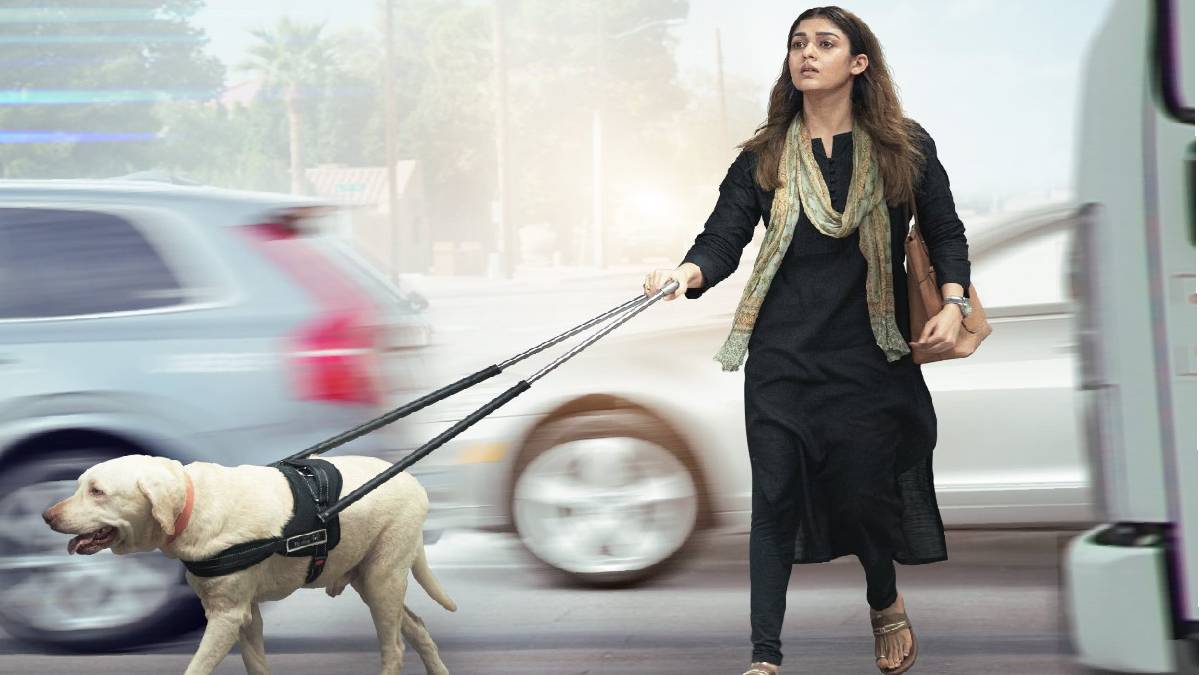 Netrikann is the most waited film of lady super starring Nayanthara is out on Disney plus Hostar. The film is receiving a good response from the storyline and acting. This film comes in reflection with the South Korean crime thriller film The Blind, directed by Ahn Sang-hoon.

Netrikann is directed by Milind Rau and produced by Vignesh Shivan under the banners Rowdy Pictures, Kross Pictures. The film stars Lady Super Star Nayanthara, Ajmal Ameer, Manikandan R. Achari, Sharan Shakti. The film is all about the complications faced by Nayanthara after her accident which made her lose her eyesight. The pain can be felt when she is accurate about an accident, but she cannot be an eyewitness of what happened in her presence since she is blind.

The film must be appreciated for the sequence that is sustained throughout the movie with the Psycho plot. The movie cannot be expected with many twists and turns, but the acceptable suspense and thrill make the film lively. If you have already watched the film The Blind, then you can only enjoy the acting of Nayanthara and the music because you will know the plot already.

How she becomes blind will be projected in the first 3 minutes of the film, where she loses one of her favourite people out of carelessness. The acting at that particular scene is perfect in her way where her eye is beautifully covered in the accident scene. The way she stumbles to stand in the middle of the road witnessing the last minute of her dear one helplessly, has captured amazingly on screen.

The story builds its thrill when she is Blind and by the mess that is happening around her. Even after losing her eyes, she is still strong and bold, being a police officer with her Braveness and striking looks. The dialogues have come out very well that directly communicates without eye contact.

When it comes to the background scoring of the film, it is just incredible with the music of Girishh Gopalakrishnan. The music tunes according to the subject of the film that occurs. Next comes the Cinematography, handled by R. D. Rajasekhar, where the angles are picture-perfect with clean shots.

All the characters have done justice to their role, including the dog that stays with Durga. Ajmal as Psycho was hard to accept initially, but in the latter part of the film, the mind fixed him as a Psycho character. Although the film is a psycho-thriller film, few comedy dialogues make the viewers laugh, which doesn't disturb the main thrill plot.

The viewers can enjoy the film if it is watched freshly without seeing the South Korean film The Blind. The film runs with predictions because, in some situations, the viewers can guess what will happen next. The thrilling can be felt without any mess, and the crime tension will be bouncing until the end of the story.

How do Psycho and Durga meet? How does Durga get Blind? What made the Pyscho the be the killer? Why is Psycho in thirst to kill Durga? Whether he killed or not are other parts of the story. To find answers to these, watch the film Netrikann On Disney Plus Hotstar.