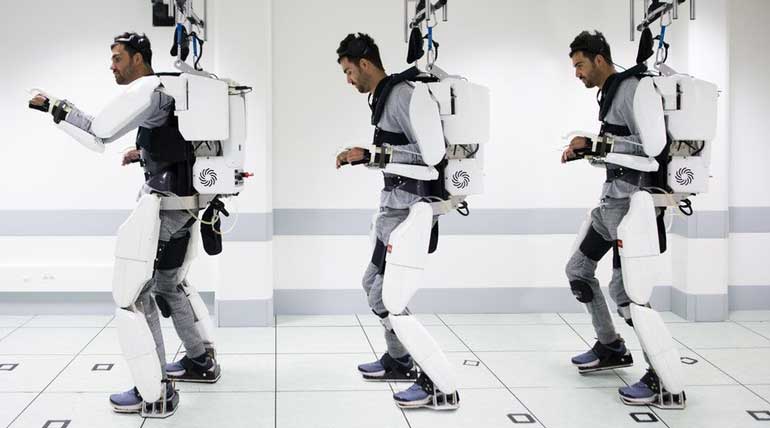 Paralysis need not be related to "Wheelchair forever" - Advent of technologies gives solution to paralysis: A quadriplegic man who is an optician in France has been paralyzed before 4 years after he fell from a 50 feet top in a night club building. He was strapped by an exoskeleton which gets signal from his brain and react.

The man named Thibault who is 30 years walked 10 metres in one go alongside series of complex arm movements. This is a wireless futuristic machine which is going to revolutionize the medical field. Scientists involved in this project said that with this success anatomy is taking a new leap forward.

The quality of life gets improved to the 20% of the population who are affected by paralysis. But the technology is so advanced that "accessibility to all" will be a million-dollar question. This is at a nascent stage and a lot of improvements should be made before the technology is given as an option to the patients.

Two recording devices each including a grid of 64 electrodes are kept between the brain and the skin on either side of the head to span the sensorimotor cortex. The patient has been instructed to control Avatar in a videogame by using mental tasks.

The algorithm is trained in this way to recognize brain signals. After two years of struggle, finally, the patient is draped with an Exo suit, and he was able to walk for ten meters in one go. A sliding ceiling harness for safety is also attached. The patient was able to walk up and down a laboratory at the University of Grenoble.

The man was excited and said, "After two years I walk, and I forgot indeed what it was like to stand and walk. More to that, I am taller than many here is impressing me. I look like an astronaut landing on the moon." Thanks to the artificial intelligence and the scientists who dabbled this on me."

The scientists are now working on how to self-balance the robot. Higher computation speed is needed, and the reaction time is not known yet. If the exo skeleton can stay on feet and robot is used for stabilization reasons, then walking is possible. "Thibault is the second person to experiment with, whereas the first experiment has failed within minutes after installing the recording device.

Our team is happy to see even after 27 months, it is working fine. Long way to go to clinically use it but certainly the much-needed step we have taken," said Ravi Vaidyanathan, of Imperial College of London.