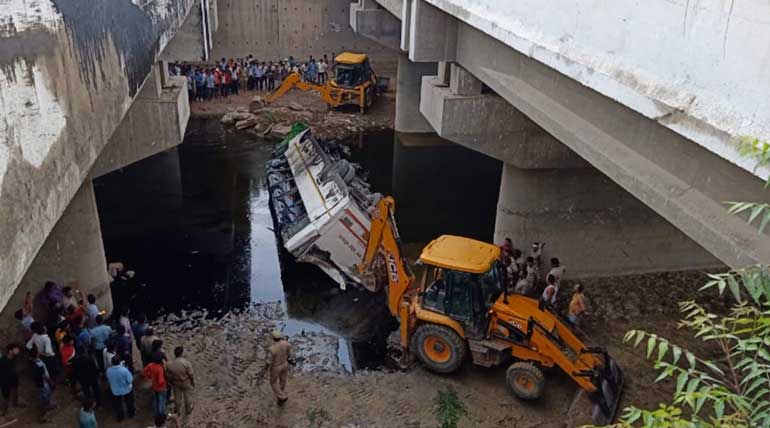 29 killed as Delhi-bound bus falls into canal in Agra

The terrible accident which consumed 29 lives happened today morning when a Lucknow-Delhi bus lost its control and fell into a drain on Yamuna Expressway near Agra on Monday. The reporter informed that 29 people died on the spot and several others injured.

The bus made a side fall about 50-feet deep according to UP police. The double-decker bus was from Avadh depot and was going to New Delhi from Lucknow.

Nearly, 50 people were on-board when the bus fell into the Yamuna expressway drain.

The Police scurried to the spot and rescue operations begun immediately to take out the passengers who were trapped and fighting for life. Divers and excavators were being used to rescue the passengers.

Sources also say that this is out-right driverâ€™s fault as he was sleepy and lost control. But so far there is no evidence whether the driver survived the accident. The survivors sent immediately to the hospital for treatment.

The injured people expressed their concerns to the police rescue team that the bus hit the railing of the expressway and made side fall into the canal.

Uttar Pradesh Honorable CM Yogi Adityanath expressed her condolences to the bereaved family and directed the officials, the District Magistrate and the Senior Superintendent of Police to react quickly and provide all the possible medical attention to the injured.

UP roadways also announced ex-gratia of Rs 5 lakh to the families of the deceased.

"Deeply condoling for the bereaved families. The tragic loss of lives, yet another bus accident but this time near Agra. I wish the injured a speedy recovery. These tragedies could be minimized only by internalizing Safe Drive Safe Life."