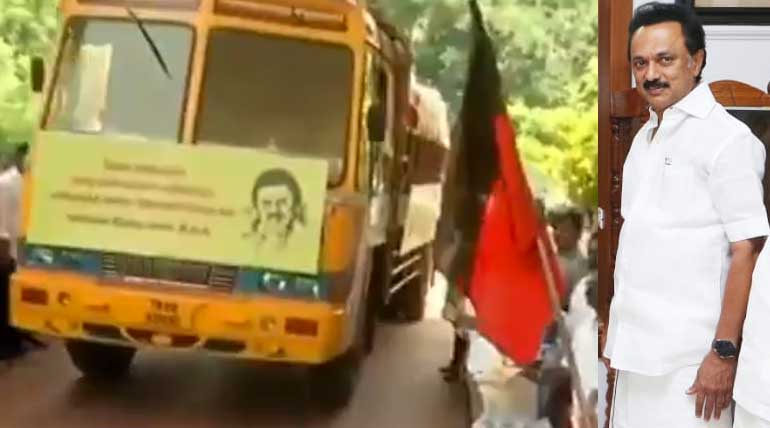 M K Stalin flags off lorries with 82 lakhs of relief materials to flood-hit Kerala: Today, 14th August, the leader of opposition MK Stalin flagged off 82 lakhs of goods in lorries to flood-hit Kerala state. MK Stalin also told to the media persons that the Kerala adjacent districts' DMK cadres are helping Kerala people who were affected by the recent rains. This act of Stalin came under wide appreciation by many people, and some also are criticizing him for not helping the Nilgiris people.

The three major Chennai district units of DMK are setting examples with this noble act. They are not only the examples for other DMK cadres but for all of Tamil Nadu and India to help the Kerala people. In the last year, it is the second time that Kerala is badly affected by rain and floods. This highly educated state is now reeling under heavy loss due to the recent rains.

The 82 lakhs of relief materials were given by the following units and persons of DMK.

Stalin also confirmed the help of Nilgiris and Coimbatore district cadres helping Kerala during their worst time of crisis. People may have some criticism for Stalin's support to Kerala, but the humanitarian support to a neighbouring state should be encouraged.

Kerala being known as the 'God's own country' is battered with rain and floods in recent days. The 100 % literate and the first in the education list of India, Kerala have to be helped in these crisis moments. And Stalin being a part of it is a good indication for the others to follow.