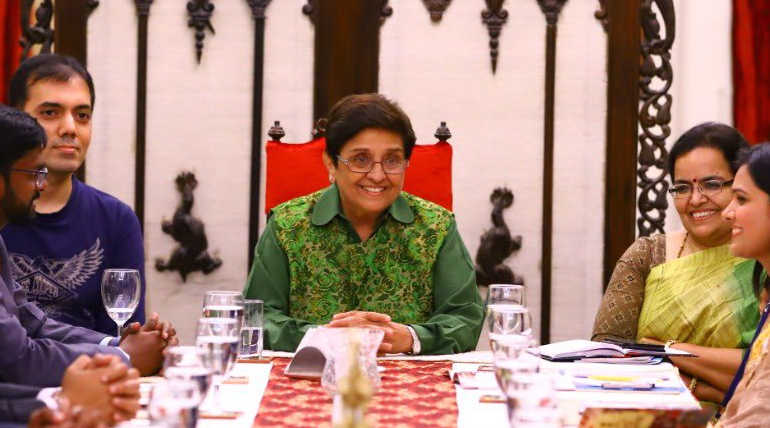 Kiran Bedi Trolled by Netizens: Kiran Bedi, Lieutenant Governor of Pondicherry today, tweeted a fake NASA video of the sun making OM sound. Netizens make the most of it from the morning 8:11 AM today, January 4, as soon as she posted the video. A retired IPS officer and a much-acclaimed police officer have now become the centerpiece of troll for tweeting this fake post in her official twitter handle.

Today morning the LT of Pondicherry suddenly posted a faked NASA video. The title of the 1.50-minute video is  NASA recorded the sound of the sun. Below the statement, there is an animated image of Galaxy. Underneath is the writing "Sun Chants OM." Then the animated image disappears to show the om sign in Hindi. The change of OM and sun happens a few times with the video ending with the picture of Lord Shiva. In the background, there is the Om sound.

Any person who uses Google can easily find out the 2018 video posted by NASA in 2018. It was the from the MDI or the Michelson Doppler Imager data of the solar sounds generated for forty days from the SOHO or the Solar and Heliospheric Observatory that was processed by A. Kosovichev.

Only naÃ¯ve persons who are not able to access Google or YouTube will take the fake video posted by the Lt. Governor Kiran Bedi to be true. But for a retired IPS officer who had been in many respectable high posts, and now is the LT. G to believe such fake video and to post it on Twitter is awkward. Now she is extensively trolled by many people on the fake video.

Some people who are new to such videos may take it to be accurate and even retweet it to others for making it a gospel truth for everyone to follow. But what will NASA think when they see this fake video? They may stop releasing such scientifically vital videos in the future.