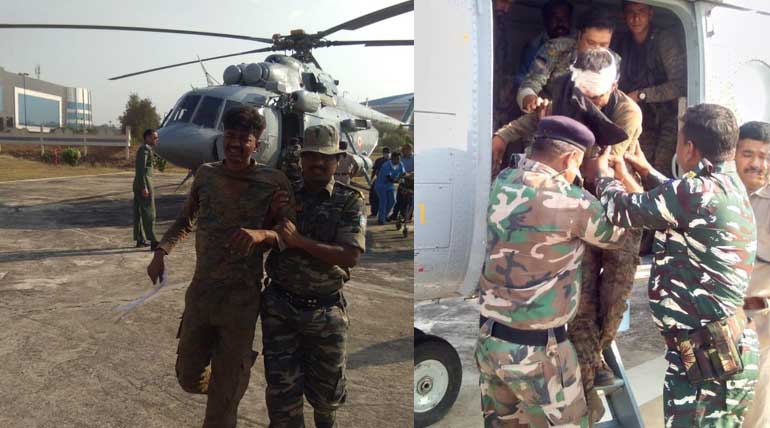 Eleven security personnel of CRPF, state police were injured in a bomb blast which took place in Kuchai area of Saraikella in Jharkhand. An Improvised Exploded Devices (IED) exploded at 4.53 A.M in Kuchai area on the troops of Jharkhand police and 209 Commando Battalion for Resolute Action (CoBRA) who were involved in some special operations. Out of eleven personnel it is said that eight are from CoBRA and three are from police. The injured persons were air lifted to Ranchi for further treatment at 6.53 A.M.

Commenting on this attack, DGP DK Pandey said, "IED's should have been installed by naxals to affect the election process." Soon after this attack, personnel from CoBRA, Jharkhand Jaguar and Jharkhand Police were deputed to clear the area. The blast took place in the CRPF special jungle warfare unit. It happened during a special operation which was getting carried out by the CoBRA and police forces. The officials suspected that the Improvised Explosive Device (IED) would have been buried under the dirt track well in advance. The special operations team was led by the 209th battalion of the Commando Battalion for Resolute Action.

Though causalities were not reported, the series of terror attacks created confusion in everyoneâ€™s mind. Three months after Pulwama attack, this has taken place. Soon after election is over, this incident created a vague. Where are we landing towards? Apprehensions and tensions are revolving around. Our Prime Minister has hitched the retaliatory measures immediately after the Pulwama attack. A lot of expectations have sprouted on the after-math of this incident in this case. "Tit for Tat" alone will not help, the security forces should be proactive to avoid such explodes. A lot of reformation is expected and with our Prime Ministerâ€™s second innings it will be materialized soon.