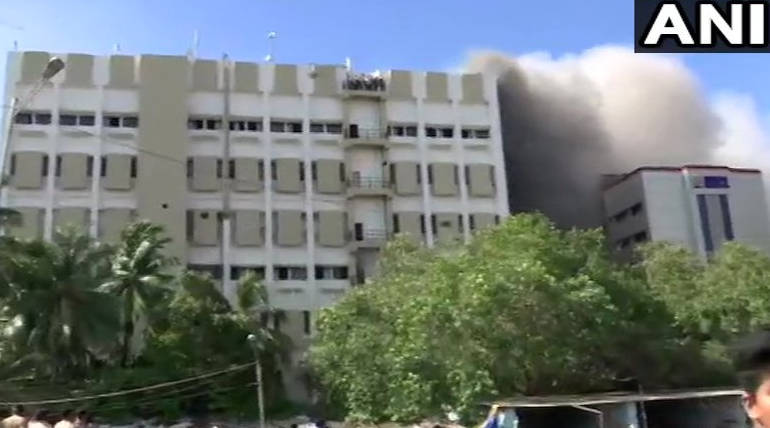 Mumbai is continuously facing the tragedy of collapse and fire for the past few days. Today it is the MTNL building on fire with 100 top of its terrace shouting for survival. Fourteen fire engines are pressed into the service of dousing the fire. So far no report of anyone injured.

The fire incident is being reported at the Telephone Exchange, near Sanjeri Building, S.V.Road, Bandra West. From the level II of minor fire category, it has been escalated to the level IV of the major category of fire now. The fire is confined to the third and fourth floor of the nine-story MTNL building.

The fire seems to have broken out at 3 PM. Luckily the MTNL building being located near the fire brigade center in Suburban Bandra. It helped the 14 fire engines to help in dousing the fire immediately. Also, an ambulance and a robot van is pressed into the fire fighting.

All those trapped on the terrace of the building are said to be MTNL employees. The cause of the fire could not be confirmed, but many have smelt burning wires before the fire started. The firefighters have entered the building and evacuating people from the 5th floor now.

Only a day ago a person died, and another was critically injured, and 13 others have to be rescued from the fire which broke in Colaba's Churchill Chambers in Mumbai. Last week it was the Dongri building collapse. Now it is the MTNL building in Mumbai.

The only good news is the firefighters are doing their job in full swing, and no injuries or death reported so far. Hope all those on top of the terrace of the ill-fated and burning MTNL building are home safe tonight.