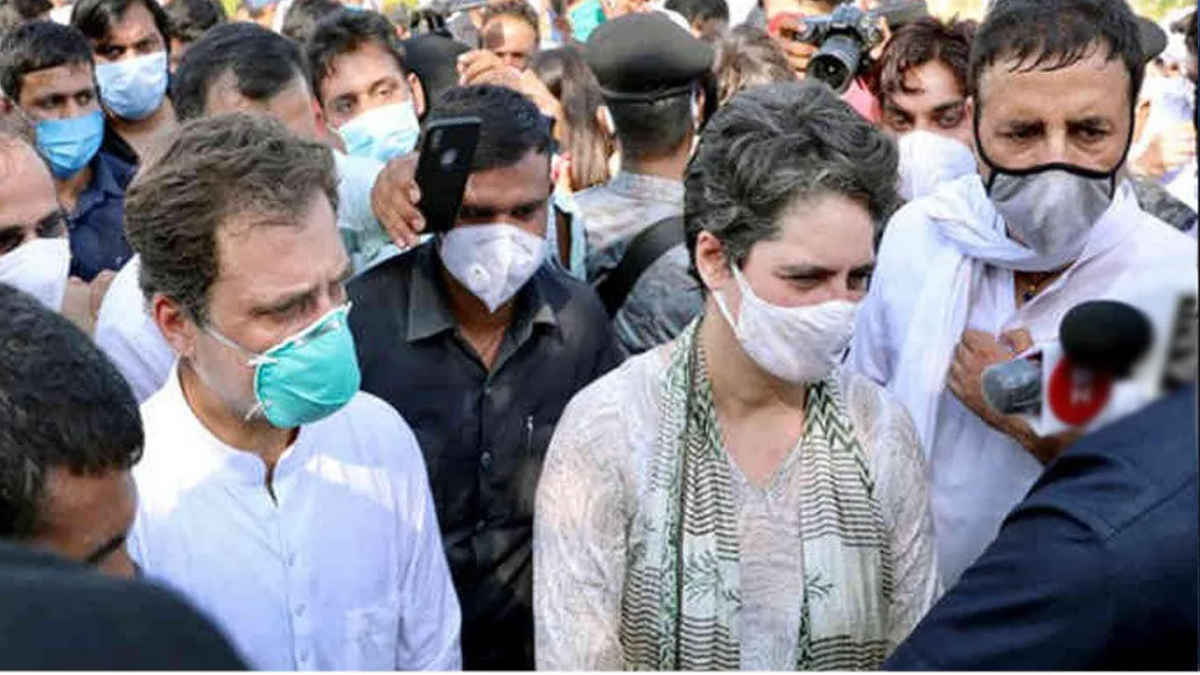 Rahul Gandhi has finally succeeded in reaching Hathras to comfort the rape victim's family. After an unsuccessful attempt on October 1, himself and his sister Priyanka Vadra were detained under Sec. 188 to enter UP. The government allowed Rahul to take 5 persons with him.

Today Priyanka drives Rahul to Hathras to visit the 20-year-old rape victim's family. The permission was granted to Gandhis after they came back today with a strong contingent of 30 + MPs and national outrage against pushing Rahul down on October 1.

Hathras is 200 km from the Indian national capital city Delhi. Three upper-class men brutally gang-raped a young Dalit girl of 20 years age on September 19. She went to the police station with broken bones, a gashed tongue, bleeding all over the body for safety. The police sent her away, saying she is creating a drama.

She was then hospitalized in Delhi, where she died after two weeks of pain in the Safdarjang Road hospital on September 30. Even before the girl's family could see her dead body, the UP police took it away and cremated it at 2:30 AM on October 1. Her family was crying locked inside their house when the law burnt the body.

Hearing the inhuman treatment to the Dalit girl while living with gang rape for more than ten days of pain and suffering, and after death burnt like garbage at midnight, Rahul and Priyanka wanted to visit the family. Within a few kilometers from Delhi on the UP border in Nodia, both Priyanka and Rahul were pushed to the ground on October 1.

They were booked under Sec. 188 for unlawful gathering and detained.  Reports surfaced in the media with Rahul saying he will walk all the 150kms to Hathras alone.  After two days of detainment, the two were released today and are now en-route to visit the suffering family in Hathras.

Now the permission is given by the UP government only after several leaders like Sharad Pawar, Sanjay Raut, Tejasvi Yadav, and many others condemning pushing down Rahul Gandhi. Also, there is a nationwide outrage, and additionally, the Bihar elections are due shortly.

Yesterday on Gandhi Jayanthi, there were massive protests in Delhi for the PM to speak on the issue as he did not even utter one word so far.  The poor girl with blood all over her body, broken bones, the gashed tongue was fighting for life, and no one to give her protection until she died on September 30 after ten days of suffering.

She was not given the fundamental human right of a respectful funeral with her family doing the last rites.  She was burnt at midnight by the UP police like garbage. But within minutes notice,  famous actresses get Y + security with 12 commandos surrounding her from the airport to Mumbai,  the business capital of India, which she called POK or Pakistan occupied Kashmir.