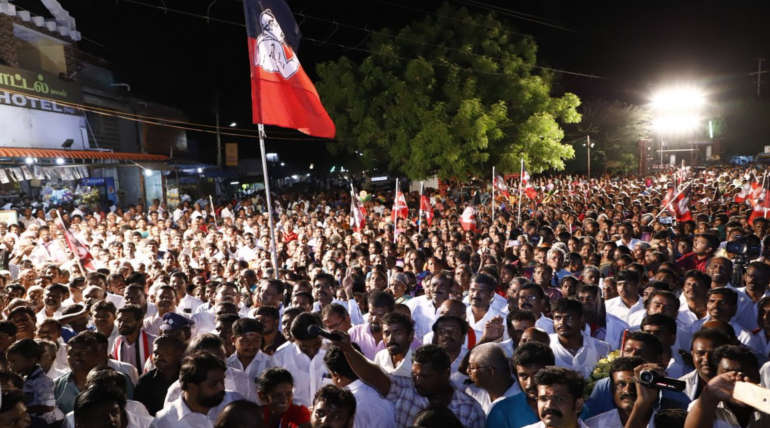 The AIADMK regime is not at risk! AIADMK retains power by gaining sufficient by-poll seats with a marginal vote difference. Along with parliamentary elections 2019, 22 by-polls were held in the state. These mid-term elections were viewed as a mini-state assembly election as it played a major role in determining whether the AIADMK Govt run by Edappadi K Palanisamy would continue for another 2 years.

Mostly, the results of general elections can be predicted by noon of the vote counting day, but, there existed a tug level between ADMK and DMK in 6 constituencies in the long run. Thus, it was impossible to expect a definitive result until 7 pm. However, in the end, AIADMK overtook DMK in 9 constituencies which are crucial in retaining their government.

In these circumstances, since Nanguneri MLA Vasantha Kumar has won the Kanyakumari parliamentary constituency, it will be declared vacant by the Election Commission of India after some proceedings. So, Tamil Nadu is going to face yet another bypoll.

Excluding Nanguneri constituency, AIADMK should have a majority of 117 seats among the filled 233 seats. Prior to the election, the strength of ruling ADMK in the assembly was 114. But, among them, there are 5 dissatisfied MLAs. When these were counted left, AIADMK would have 114 - 5 = 109 seats. So, overall, 117-109 = 8 seats were needed by the party taking account of all the risk factors.

Anyhow, the party managed to get 9 seats among the 22 contested constituencies. Even though the victory is retained, notably, it has been confirmed by a few thousand votes difference. On the other hand, the strength of the DMK alliance has risen from 97 to 110 as it has won 13 seats.

Therefore, the AIADMK has gained the needed majority irrespective of the upcoming by-election in Nanguneri and the count of 5 dissatisfied MLAs. There is no threat to the AIADMK regime led by Palanisamy and it would continue for the next two years. Despite the preservation of the regime, legislative elections and parliamentary elections results show the possibility of regime change in the 2021 assembly election as its opponent party DMK has secured high percentage vote bank in both the parliamentary and state assembly elections.

Keeping aside of Vellore parliamentary constituency, DMK has won 38 out of 39 seats in Tamil Nadu and Puducherry. AIADMK winning seat is the one and only Theni constituency. In this, Raveendranath Kumar, son of Deputy Chief Minister O Panneer Selvam, has won over 75,000 votes more than EVKS Elangovan, one of the senior Congress leaders.