BJP Leading in 23 Seats out of 28 in Karnataka 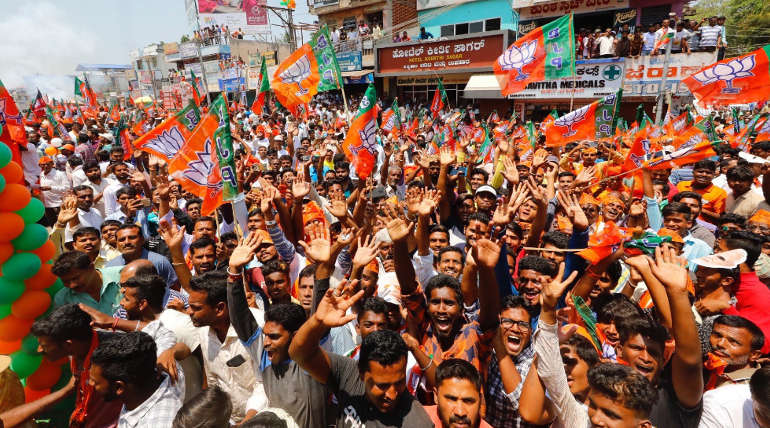 As the results are coming out for the 2019 parliament elections, it has become sure that Modi is going to be the Prime Minister again. In Karnataka, the family of Deva Gowda is the biggest losers. The results may change the politics of Karnataka as soon as possible.
Former Prime Minister Dewa Gowda trailing behind Basvaraj: The BJP in Karnataka routes the Congress- Janata Dal (Secular) coalition. In the recently concluded assembly elections, the Congress and JD (S) coalition formed Government. BJP was only short of 10 MLAs, and it was seen as a setback for BJP. But they have come strong again in Karnataka by leading in the 23 of the 27 seats they contested. They supported the independent candidate in Mandya. Even former Prime Minister Deva Gowda is trailing behind BJP's G S Basvaraj in Tumkur constituency. Chief Minister Kumarasamy's son trailing behind Sumalatha Even the son of CM Kumaraswamy, Nikhil Kumarasamy is trailing behind Sumalatha, wife of Ambrish Puri who is contesting as an independent candidate in Mandya.

Bengaluru results: BJP is leading with a thumping majority with of 1.3 lakhs and 60,000 in Bengaluru South and north. The only consolation for Congress in Bengaluru is its candidate Rizwan Arshad leading by 27,000 votes against his BJP opponent in Bengaluru. People of Karnataka have given a clear mandate against the rule of the JD(S) - Congress coalition government, which was under chaos during rule for the past one year.


BJP Leading in 23 Seats out of 28 in Karnataka