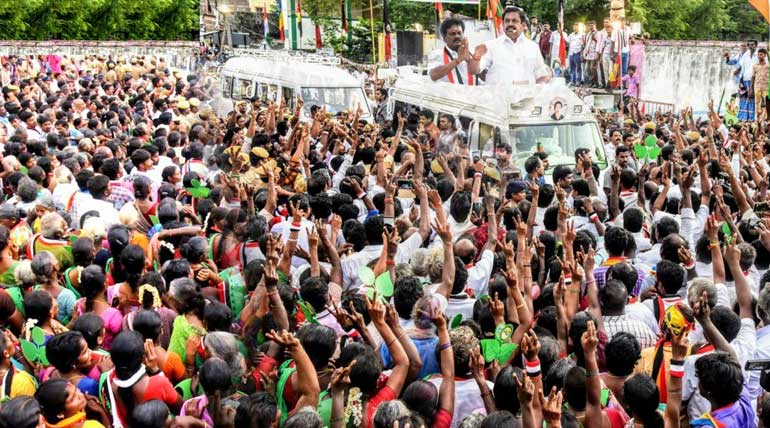 CM Edappadi Palaniswami aggressively campaigned in Vikravandi and accused DMK of a party born and grown in lies: Chief Minister was aggressive in his campaign today, 18th October in Vikravandi, accusing DMK of a party born from lies and raised in lies.  Stalin speaks only the lies, and nothing can hide AIADMK achievements was his contention. By-election fever is at its peak in Nanguneri and Vikravandi elections today.

OPS and Vijayabaskar in Nanguneri: While CM was aggressively campaigning in Vikravandi, it was deputy chief minister O Panneer Selvam in Nanguneri. He was answering to the question of Stalin about what were the achievements of AIAMK in the last eight years. He said that it was only Amma who solved the electricity supply issues within one year, which the DMK was unable to do.

He also said many achievements of Amma on the empowerment of women. Four grams to eight grams of gold to mangal sutras for women was the performance. He also accused the DMK government of inciting violence in their previous rule. Transport minister Vijaya Baskar added fuel to the fire of charging and questioning Stalin in Nanguneri.

All the AIADMK camp today was aggressively answering to Stalin's accusations yesterday. With the campaigning to end tomorrow, 19th October, at 5 PM, there will be the final round of further allegations and counter-accusations by both party leaders. But what is the result of the people will be only known on 24th October.