Is the Rejection of EC of 22 Opposition Parties Request Right? 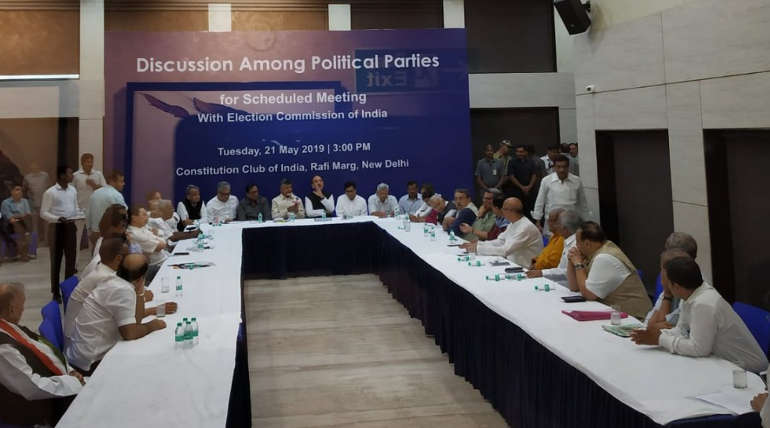 Is the rejection of EC of 22 Opposition parties request right?

Afraid and rattled by the exit poll results the 22 opposition parties united together and went to the Election Commission with a request. It was a simple request of verifying the VVPAT or the Voter Verified Paper Audit Trail Slips with EVMs or Electronic Vending

Machines first before the counting of the EVMs. But the Election Commission stating protocol reasons rejected it and said it would be counted only after the counting of votes in EVMs. The protocol of counting postal ballots before EVMs is changed now and is going to be counted along with the EVM simultaneously. Why the change of protocol for one and not for another?

Why is the opposition seeking to check VVPAT with EVM first?

As per the Supreme Court's order, it has become mandatory for the EC to check VVPAT with EVM in 5 booths of every assembly constituency. The order was to check off any malpractices or tampering of the EVMs. If in the checking there is a mismatch between

the number of votes in the EVM and the VVPAT slips then all of the votes have to be rechecked with VVPAT trail.

What are the consequences of crosschecking VVPAT with EVM in the end?

The opposition fearing malpractice and tampering wanted this checking before the EVM counting. It is because after counting the EVMs and announcing the results, it will be difficult to reverse it if any mismatch found in the checking. Also, it will lead to a lot of

confusion and possibilities of violence. It was a reasonable request in the interest of democracy. But as usual, it was rejected by EC yesterday. But for changing of the protocol of counting postal ballots was justified by them stating the increase in its size this time. The opposition request was also with genuine concern of proper counting.

Then why was it rejected?

It is for the people of India to decide whether the rejection was right or wrong.

Is the Rejection of EC of 22 Opposition Parties Request Right?