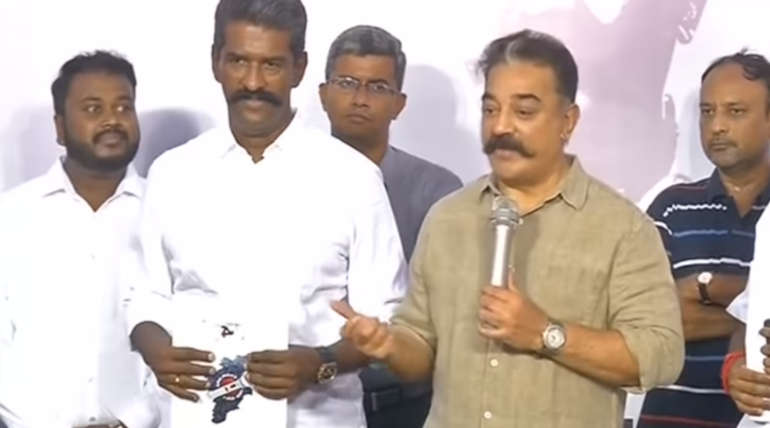 Not feeling let out or fooled but delighted with the overwhelming support of people: Kamal Hassan, the leader of the MNM or the Makkal Needhi Maiyam today met the press and answered their questions. To one question by a reporter, if feeling let out by people, Kamal said he does not feel that way, but thanked the people for their overwhelming support for a party at the 14-month infancy stage. The MNM party campaigned as per the guidelines of Election Commission and as per their financial conditions is another assertion by Kamal. He also said that they fought those who stormed money in these elections.

Kamal Hassan congrats Modi and Stalin: Kamal congratulated Modi and Stalin for their landslide victories in Center and State elections. He also asked Modi to lift poverty throughout India. He also said that his profession is not politics and it is only art and confirmed he would continue his job in films. He stressed that his party has fought the elections honestly and truthfully and will remain so in the future.

People should be relieved of poverty is our goal: Most of his speech was of uplifting the lives of ordinary people from poverty. He also accused political parties are keeping in people poor to use them once in five years for winning elections. He thanked all his party persons for their relentless work during the full course of elections.

3rd place in 13 Lok Sabha seats â€“ an achievement by MNM: Out of the 38 MP seats, to everyone's surprise, MNM lead by Kamal Hassan was in the 3rd place. In Chennai, they got a vote share of 10%. Also, in the industrial belts like Coimbatore, Tirupur and others. They got more than 15 lakh votes in the MP elections which is a rare feat.

Though Kamal Hassan's MNM did not win even in one seat, for a party started one year back to get 3rd place in 13 MP seats is not easy. And it seems that Tamil Nadu has got MNM has an alternative to Dravidian parties.