NEET The Spearhead of DMK Campaign in Vellore 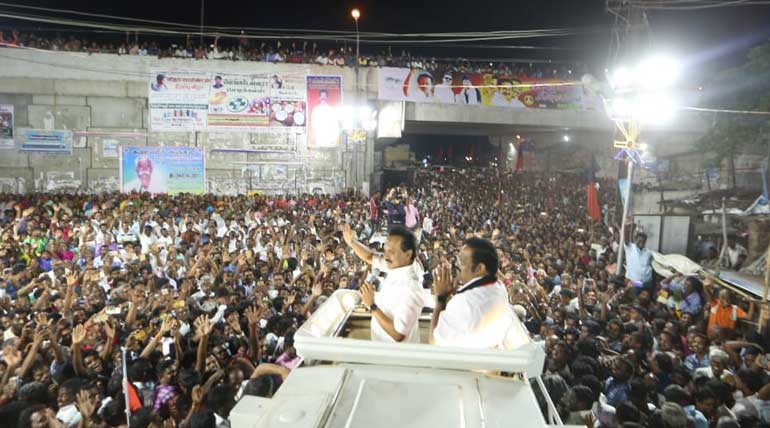 NEET, the spearhead of DMK's campaign in Vellore.

DMK in a hurry to keep their winning streak in the elections has chosen NEET as its weapon to spearhead the campaign against the ruling party in Vellore. MK Stalin addressing the crowd in Vellore cited the death of a young girl that he received information that Keerthana, a NEET aspirant from Perambalur district committed suicide leaving a note saying that a girl who got less marks than her got the opportunity while she didn't.

"Keerthana has joined the list of victims who have been destroyed by the NEET exam similar to Anita", he said.

His predecessors did it, but EPS couldn't.

He also accused EPS as the assistant who serves the Modi government and is incompetent in handling the NEET issue." NEET couldn't enter into TN during Kalaingar's governance, and Jayalalitha too prevented it, but EPS has failed the TN people," he said.

In light of this new information, Stalin accused the ruling party of deceiving the people by giving false promises during their campaign for the parliamentary elections four months ago.

Demanding answers for not revealing the information earlier he says" it is their duty to reveal the information earlier, but they decided not to do so thus betraying the people". The Supreme Court has ordered the TN government to answer why they didn't inform the members of the assembly and show evidence of the steps they took to get information from the central government regarding the resolution before August 13th.

Vellore is facing a delayed election after it was postponed by the election commission when they ceased an amount of over three crores just before the election which was intended for distribution to the voters. The major players in the race are Kathir Anand for DMK and AC Shanmugam for AIADMK.