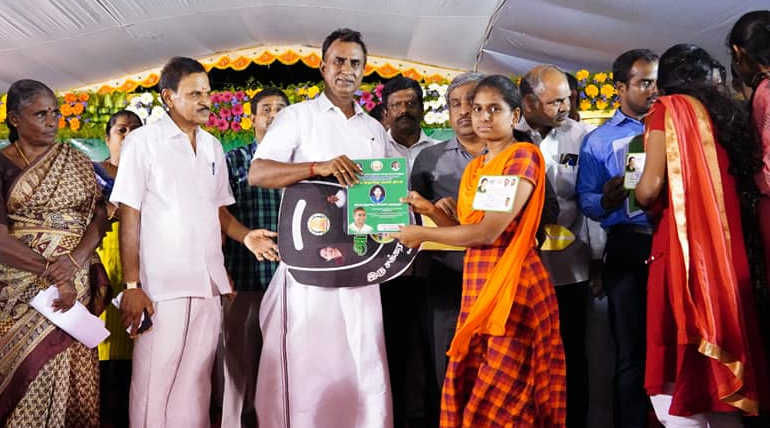 SP Velumani participates in many welfare schemes in Coimbatore.

Minister SP Velumani and Coimbatore rural district AIADMK secretary is all praise for Chief Minister Edappadi K Palaniswami. He also criticized the opposition parties during participating in various welfare schemes in and around Coimbatore. With local body election dates announced in December, it is going to be a hectic schedule for the minister in the next two months. Since winning maximum seats in the Coimbatore is his responsibility, he works round the clock for the welfare of the Coimbatore people and also for the AIADMK party to win in local body elections.

S P Velumani being the cabinet minister for  Municipal Administration, Rural Development, Corporations, Panchayats and Panchayat Unions, Poverty Alleviation Programmes, Rural Indebtedness, Urban and Rural Water Supply (TWAD) and Implementation of Special Programme is making sure all the smart city requirements are implemented quickly in Coimbatore. It is the reason that the Harmandar Singh, the principal secretary of Municipal Administration, and Water Department, is coming to Coimbatore to oversee the work in Ukkadam.

In the recent review meet for it in Chennai, Harmander Singh chaired the meet to discuss the implementation of smart cities requirements in many places in Tamil Nadu. Once again, it was Coimbatore, which ranked first in smart city implementations. Out of the 48 requirements for the smart city with an estimated budget of Rs. 1,068.91 crores, so far 18 have been completed in Coimbatore. For the remaining schemes in Coimbatore, it was decided in the meeting to issue tenders by December, and projects like upgrading the end of December will complete lakes.

Minister SP Velumani is busy now implementing many social welfare schemes. His recent participation in many such occasions include

Minister is also critical of the opposition and said that that AIADMK is not like Goebbels to give false promises to people. He noted that AIADMK under the leadership of chief minister Edapadi Palanisamy and as per the way of Amma is fulfilling all the welfare schemes in Tamil Nadu.