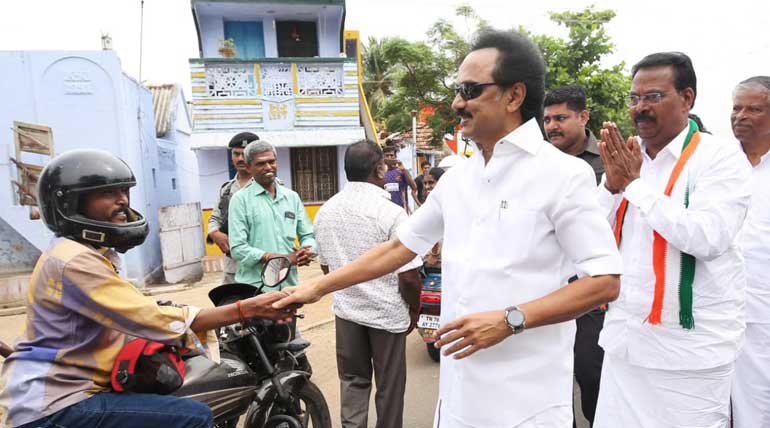 Stalin accuses AIADMK on many issues in today's interaction with Nanguneri people: DMK leader MK Stalin continues his fierce campaigning in Nanguneri for the by-elections on 21st October. Today the opposition leader, along with Nanguneri by-election candidate Ruby Manoharan went to many places in Nanguneri.

All along the walking journey, he held many shuttle campaigns and also had many interactive sessions with the Nanguneri people. In one such interaction in Sengulam, he highly criticized the ruling AIADMK and garnered votes for Ruby Manoharan.

Nanguneri by-elections: With the sitting MLA Vasanth Kumar being elected as the Kanyakumari MP, the current by-election to Nanguneri is to be conducted on 21st October. With his brother Kumari Anandan not given the seat to contest, the DMK chief has a lot to do in the constituency.

Hence he is going around Nanguneri to garner support for Ruby Manoharan. Since it is a prestigious issue for DMK not to lose its alliance seat to AIADMK, Stalin is making sure that Congress wins the Nanguneri MLA seat.

What are the contentions of Stalin in Sengulam, Nanguneri, today? DMK leader Stalin accused AIADMK on various issues and also set out many reasons why the people should vote for Congress on 21st which include

With only ten more days for the by-polls in Nanguneri, there may be more fireworks among the two main contestants DMK and AIADMK.